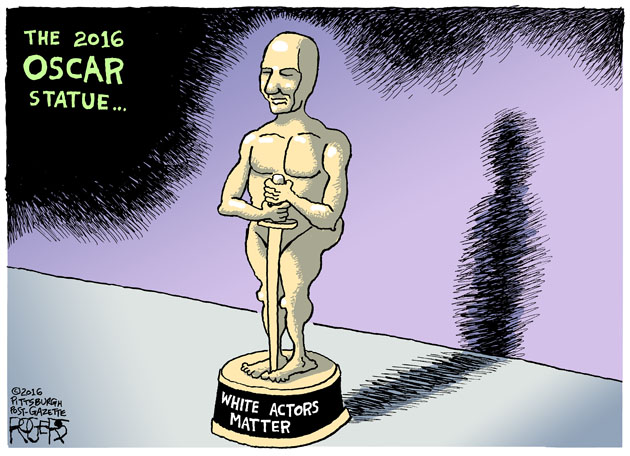 Sarah and I have watched the Academy Awards together for years. This year, we’re going to skip it. #OscarsSoWhite has been gathering steam and generating plenty of controversy. That discussion will be far more useful in my daughter’s life than another too-long, self-congratulatory ceremony.

Nominee Charlotte Rampling remarked “perhaps the black actors did not deserve to make the final list.” This is a common argument, used frequently by opponents of equal opportunity initiatives. It presumes that “fairness” is possible (that a level playing field already exists), and it narrows the scope of consideration to the individual rather than systemic level, where such conversations need to happen. A better formulation might be, “What caused black actors to be left off the list?” That’s what must be addressed.

I rarely use the word “snubbed,” because it implies a conscious decision not to vote for someone, but Ava DuVernay was certainly overlooked as best director last year. Set aside, for now, the fact that tentpole movies are routinely handed to inexperienced white male directors, and DuVernay had to battle for the opportunity to make her movie – Selma (2014) could certainly have been “fairly” considered one of the best directing efforts of the year. However, best director nominees are decided by the directing branch of the Academy, which mostly consists of white males. (Acting nominees are determined by the acting branch, etc.) It’s not enough to tell the directors, “Make sure you fairly pick the best nominees from the movies that were released this year;” there must be more opportunities for women and people of color to make movies to begin with. The Academy might not make those business decisions directly, but it certainly has influence.

But the best is the best, right? Isn’t it a slippery slope when we start playing the “quota game,” choosing undeserving people just to be politically correct? To which I respond, How do we know we even had the best to choose from? Science has not identified a gene that disproportionately bestows cinematic talent on whites. If the nominees don’t represent how society looks, Occam’s razor suggests there’s a reason other than “the white guys were simply better.”

Because here’s the thing. Anybody who loves movies knows the Oscars almost never get it right. Everybody complains about dumb Best Picture winners like Crash (2004), or Shakespeare in Love (1998). The Oscars are essentially people who work in the industry saying, “This is what we think is our best.” To which we reply, “You need to do better.”