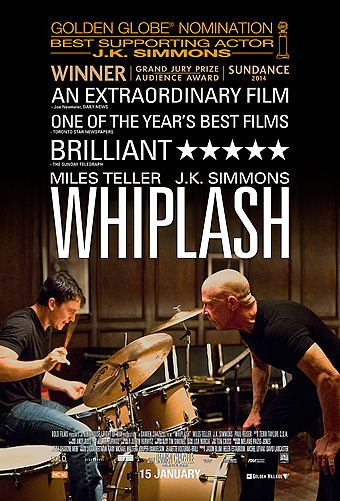 I once dated a double major (piano/clarinet) who attended Crane School of Music. I worried about her. She’d compose rambling, semi-coherent letters after her daily 8-hour practice sessions, obsessed with the idea that she didn’t have “what it takes” to be a musician. In retrospect I don’t think she did have it, which is: a desire to make music, to collaborate, to express herself and convey some essence to an audience. Damien Chazelle’s Whiplash is like one of those letters – anxious and missing the point. Its desperate energy creates the illusion that something impressive is happening, but what it really taps into is the exhausted uncertainty of a certain kind of student.

The movie begins badly, with a pretentious, portentous low tracking shot, approaching Andrew (Miles Teller) as he practices. He’s trying to play faster, and one might leave the movie thinking speed is a drummer’s only goal. J.K. Simmons, whose jagged temple vein won the Academy Award for Best Supporting Actor, plays sadistic teacher Fletcher, who insults, assaults, and plays psychological games with his students to bring out depths of talent they never knew they had. Right. Chazelle, who also wrote the screenplay, has Fletcher repeat (and repeat) an apocryphal story about how Jo Jones threw a cymbal at young Charlie Parker’s head, “nearly decapitating him,” supposedly the event that inspired Parker to practice harder and become Bird. Not quite. (Jones purposely dropped a cymbal on the floor when Parker lost his place in the music.) Music-teacher-as-drill-sergeant is undoubtedly how some teachers are perceived by their students, but the movie never gets beyond it. By the end, Chazelle would have us believe that Fletcher has finally “created his Bird” by pushing Andrew further (and of course faster) than he knew he could go.

Alan Parker is another director who made several high-energy music films with no music in their souls, particularly Fame (1980). As I watched, I jotted a note that Whiplash is the movie Parker was trying to make when he shot Fame (not a compliment). Chazelle’s musical sensibility is better matched to his material than (Alan) Parker’s was, and he has a brilliant technical team to help with the illusion that Music is happening (Tom Cross’ editing, and Craig Mann, Ben Wilkins, and Thomas Curley’s sound mixing deservedly won Oscars.) The problem is that Chazelle doesn’t have a film artist’s sensibility. He’s a hack. He stacks the deck with plot contrivances (lost music folders, forgotten sticks, flat tires) that amp up the tension but conflate the difficulties of becoming a musician with the difficulties of being an everyday human being. More than music, Chazelle wants his Rocky-esque climax, where the hero comes back against all odds and shows everybody what he’s made of.

Miles Teller was impressive in The Spectacular Now (2013) and he’s apparently really a drummer, but I didn’t believe him here. He’s too laid back, with too little connection to his fellow musicians. There’s never a sense that he comes to life when playing – it looks like he’s trying to pass a kidney stone. That might have been interesting if Andrew ultimately decided he didn’t have the music in him, but the movie wants us to believe that if he just tries harder (and plays faster) he’ll make it. Paul Reiser has exactly one good scene, his first in the film, where he conveys easygoing humor as Andrew’s dad; things go downhill at an awkward family dinner scene lifted from Saturday Night Fever (1977), where dad can’t defend his son against buffoons who don’t understand why music is better than football. At least Reiser fares better than Melissa Benoist, seen by Andrew and the writer/director as female distraction from potential male greatness. Benoist is quite good and is almost allowed to make an impression, but Chazelle isn’t really interested.

Here’s Chazelle’s thesis: “There are no two words in the English language more harmful than good job.” It sounds like a great sentiment. (It echoes The Incredibles (2004), which posits that nobody is special if everyone is.) But Whiplash never stakes out a coherent point of view. Presuming Andrew’s climactic drum solo is great music, does it mean that great music blossoms from deception and abuse? Does more effort, more speed, more blood equal great art, and ultimately justify Fletcher’s tyranny? My gut says no, and the movie sometimes leans that way. Maybe it depends on how much Andrew’s last solo turns you on. I think Chazelle believes it, and some of the audience raves suggest people are with him. I prefer Chazelle’s original 18-minute short film, also called Whiplash. It has all of Fletcher’s bigoted, face-slapping, cymbal-throwing tyranny, but it ends before the music begins. The feature-length movie has great cinematography, mixing, and editing, which add lots of sound and fury. But there’s still no music.

Moss Island Sound Off – another take on Whiplash

Hear this piece in Podcast Episode 3