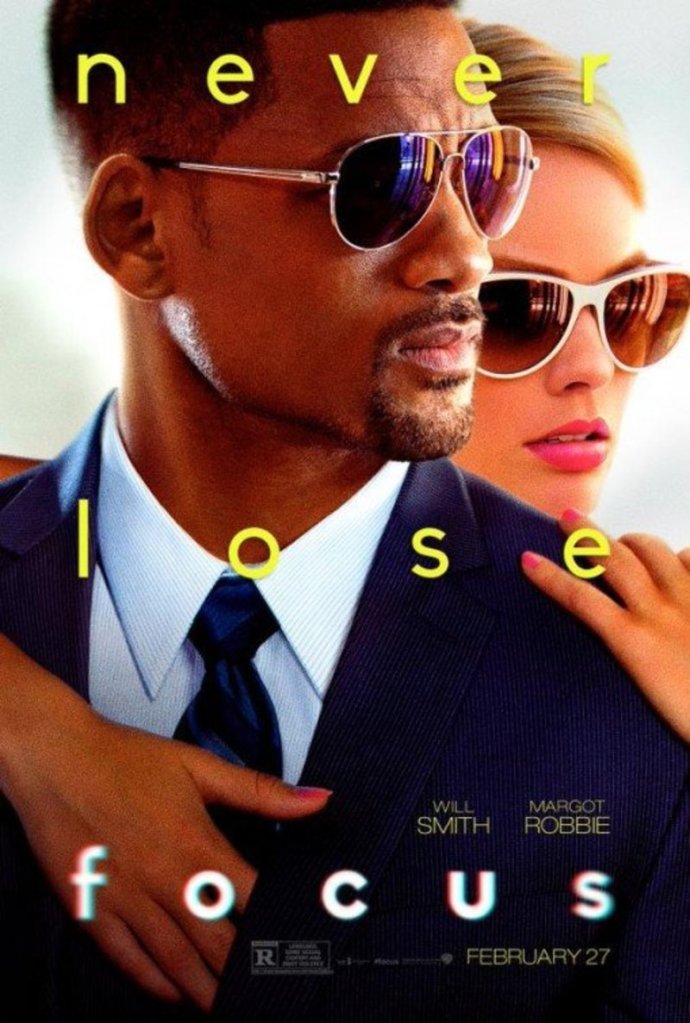 A conversation between Glenn Ficarra and John Requa, as they conceived the movie Focus, the fourth film with that title since 2001 (all unrelated). I’m fairly certain it happened exactly this way.

Definitely. How hard could it be?

Ooo – you know what movie I loved? That Ocean thing with Clooney and Brad Pitt.

Way too confusing bro – and we don’t know anything about scams and stuff. Let’s do a movie about race cars. Like that Tom Cruise one…

Hey – a scam movie with Tom Cruise and race cars!

But not too confusing –

We can explain everything. Like, we’ll have the characters talk about whatever scam they just did.

And we need some totally hot babe – ooo, I just wrote our first dialogue!

Man, that’s good. OK. So we got Tom Cruise as, like, this super cool scam guy.

And the hottie wants to get a piece of the action —

Ha! I see what you did there…

— so he TEACHES her how to scam…

And she turns out better than him —

Because he’s totally fallen for her!

That’s the title! That’s the name of the movie! You’re a genius!

OK – we gotta keep using using that word in the script, so the audience gets it. Like, “You gotta keep your focus to do a good scam.”

So good. I can’t believe nobody’s ever thought of this before.

And like, maybe SHE helps him find a NEW FOCUS —

Because she’s a total hottie.

And they’re cool, but not as cool as Tom Cruise.

And they all want to hit the hottie.

Because they’re not Tom Cruise?

Nah, dude. You gotta be creative.

OK. Because one of them is really fat.

Good. And maybe one has glasses —

And another guy says gross stuff.

Man, it’s easier than I thought to write a screenplay.

Ooo – dude. Total inspiration here. Tom Cruise is all hung up about his dad – who’s an even MORE famous scam guy.

I like where this is going. And he tells the hottie about his dad, which proves he’s really into her because he doesn’t talk about personal stuff.

Right. Put that in the dialogue, so nobody misses the point.

Already did. And then the dad shows up, but you don’t know it’s him —

Hold on. We tell people eventually, right? Because I’m getting confused…

Oh, yeah. We’ll explain it two or three times so everyone gets it.

Dude, you know what song we gotta use? That Stones song about the Devil.

We’ll use it twice.

Dude. Bad news. Tom Cruise can’t do the movie. But they said Will Smith is available.

I think so, but it’s no big deal. This is, like, a totally enlightened script.

Yeah, it’s not like a super cool scam guy can’t be black.

As long as the hottie is white.

You read my mind.

Bro – I just had a thought.

Definitely. How hard could it be?

Hear this piece in Podcast Episode 2