The 2014 Inaugural Class was a spur-of-the-moment blog entry, titled Brophy Awards because I thought it was clever:

Bryophyte: Any green, seedless plant that is one of the mosses, hornworts, or liverworts.

Tony: The Antoinette Perry Award for Excellence in Theatre, commonly known as the Tony Award.

Clever but not catchy; requires too much explanation. So I tapped Pea Rob, Moss Island’s graphics wizard and all-purpose consultant. Pea came up with a better name and an icon to go with it – thank you!

Award lists always say more about the writer or the awarding committee than the subjects of the awards themselves. They are always limited – nobody sees everything, and what is seen might have been affected by an off night, a bad seat, a bad mood. None of which means we shouldn’t take a moment to celebrate our favorites. And so… 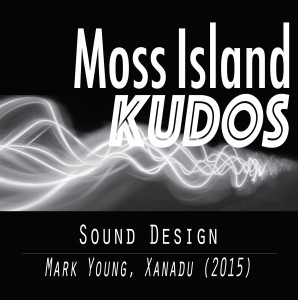 The best sound design is often invisible – people notice when you screw up, not when you nail it. Good design is also about solving problems – in this case, how to deal with body mics on performers, with audience on three sides, and minimal budget. Young put small speakers on stands facing out from the central playing area, which had the added bonus of enhancing the set design, a 70s-era roller rink. We could hear everything except feedback. Kudos.

Choreography – Christina D’Amico, Nice Work if You Can Get It (Stage Two)

In a show with many dances, and dancers of many skill levels, D’Amico was inventive and came up with some extremely funny numbers (her features for Megan Breit and Ally Priore were fantastic.)

I saw New Hartford High School’s production of The Addams Family in March; although I thought the cast was good, I struggled with antipathy for the material itself, and the tech was lackluster. When I saw the musical presented again during the summer, as part of the Rome Capitol Summerstage series, I took heat for my comments about the ho-hum book and music, and for suggesting it was a minimally directed show. As I thought later about both productions, I realized the high school performers got more out of the material than Rome’s amateur company; particularly New Hartford senior Andrew Sandock, as Gomez. That part was played in the Rome production by Peter Loftus, comic actor extraordinaire, way off his game in that production. Still, there aren’t many actors who can outperform Loftus under any circumstances; Kudos to Sandock. 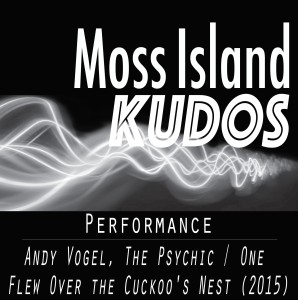 Performance – Andy Vogel, The Psychic (Ilion Little Theatre) and One Flew Over the Cuckoo’s Nest (Players of Utica)

I saw Andy Vogel four times in three productions in 2015 (I paid to see The Psychic twice), and I wish I’d seen even more of him. He’s a great physical actor, adept at both comedy and drama. The fact that his knockout performance as Randle McMurphy was overlooked by a TANYS (Theatre Association of New York State) adjudicator is enough to question all TANYS adjudications (subject for another essay. TANYS conveniently doesn’t commit its opinions to writing, but there are plenty of head-scratchers.)

Performance – Megan Breit, Nice Work If You Can Get It (Stage Two)

As firecracker Billie Bendix, Breit almost stole what was a very good show to begin with. I particularly loved her rendition of Treat Me Rough, wherein she ineptly tries to seduce a playboy. In different hands, the number might have been crass; Breit made it sweet and sexy, and incredibly funny to boot.

From my review (I can’t come up with anything better now, except that I’ve been fondly remembering this performance for the past seven months): “Victoria Girmonde is radiant and daffy (in that order) as Mz. Grim. She turns the heads of the characters and the audience with her entrance, in impossibly short skirt and red silk blouse. Then she speaks, a weird breathy singsong that drops at the end of every phrase – it’s a parody of the sexed-up dragon lady. Even the script seems to want her to play a conventional femme fatale, wrapping men around her finger. Girmonde avoids the cliché; she ends up liking the attention so much she forgets about twisting knives and emerges from each new seduction more breathless, intoxicated with pleasure in her own attractiveness. It’s a delicious comic soufflé – the effect would fall if she flattened her lines, tried to play it like Bette Davis, and especially if Girmonde was physically tentative. (She spends the second act with her blouse completely unbuttoned, which would have been awkward for the audience if the actress seemed uncomfortable.) I even laughed at what would ordinarily be a typical amateur theater dodge, when a character was supposed to put his hand on her breast and went a bit high instead. Girmonde seemed to squirm in frustration, as if insisting: No, you idiot, touch me HERE.”

A tour de force performance that astonished because of its scope and emotional commitment – the audience was sucked in and held rapt for two hours, which seemed only minutes. Rumor has it the production will happen again in 2016 – seriously, you’d better see it.

Patrick is a dancing performer who also happens to choreograph and direct, like, say, Bob Fosse. I designed lighting for his production of The Drowsy Chaperone, so I didn’t review it. But if I had, this is what I would have written: “St. Thomas throws everything but the kitchen sink at the production, then he throws that in too, for good measure. Then he throws in a couple more sinks, because why not?” A theater artist I’ll follow anywhere, although (because?) he’s “batshit crazy.” The best kind.

You have to give credit to productions that swing for the fences, even if they aren’t entirely successful. The MVCC Theatre students and crew swung big on this one, honoring theater history and putting their own stamp on the material.

During the curtain call for Mohawk Valley Ballet’s 2014 Nutcracker, Melissa Larish stood on stage while the company’s founding artistic director announced her choice of successor; it wasn’t Larish. The board hired her anyway. She had little choice but to re-stage the 42 year-old production; still, it was a damned-if-you-do/don’t proposition, and a daunting task during a transition year. I’ve participated in 21 Nutcrackers with the company, and this year was more laid back and collegial than any I remember, despite the ever-present risk of failure. When I finally saw the group’s first rehearsal on stage, I knew they had a show. Live theater is hard work, especially when there are people waiting to see you fail. Larish deserves credit for pulling it off, with grace.