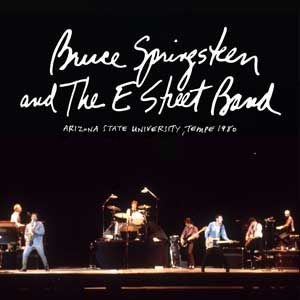 Bruce Springsteen didn’t produce new music or tour in 2015, but the year will be remembered as a productive one in any case. Fans were treated on a regular basis to pristine archive recordings at budget prices, plus the massive River/Ties That Bind retrospective that dropped on December 3. Springsteen has been very much on our minds.

Ippodromo Delle Capannelle, Rome 2013 was released with minimal fanfare in early November, absent the usual breathless hype from Backstreets, and was quickly pulled. The selection of the show and the timing were both strange, given that Columbia was busy promoting the upcoming River box set. A note on live.brucespringsteen.net said there had been a mixing problem, and a replacement would arrive shortly; “shortly” turned out to be almost two months. (The mixing on the final product is unspectacular – less clear, less revelatory than any of the other archive installments.)

The show as a whole is typical latter-day Springsteen – the hits are tired and his voice is an unsteady fraction of what it once was. (Despite repeated claims by Springsteen himself that he and the band have never sounded better, the archive series testifies to the delusion of that sentiment.) The 2012 Apollo Theater release, which kicked off the archive series only a year ago, is a much better set. Still, Lucky Town and Stand On It are rare enough, each exuberantly played and welcome additions to any library.

It’s the heart of the concert that justifies all of it, of course, four songs from The Wild, The Innocent… played in one glorious 48-minute stretch. The Roma Sinfonnietta was called in to provide a string section, which along with the “E Street Orchestra” (multiple backup singers and a full horn section) comprises one of the largest ensembles Springsteen has ever deployed.

The music is worth the effort. Rock fans of a certain age like to discuss the “perfect album side,” which often includes examples like The Beatles’ Abbey Road Side 2, Elton John’s Goodbye Yellow Brick Road Side 1, The Who Sell Out Side 1, and Springsteen’s The Wild, The Innocent & The E Street Shuffle Side 2. Springteen’s entry was from his second album, recorded when he was just 23 years old. The scope of musical imagination was so far beyond what he’d done until then as to seem otherworldly. It’s a symphony. (Credit has to go to David Sancious, who handled the piano and most organ duties for the E Street Band back then; Roy Bittan is a competent accompanist but he’s never pushed Springsteen arrangements to the heights Sancious managed.)

Ippodromo Delle Capannelle features a 16-minute Kitty’s Back, followed by Incident on 57th Street / Rosalita (Come Out Tonight) / New York City Serenade (the aforementioned Side 2). Springsteen’s vocal is shaky to start Incident, and Rosalita doesn’t outdo any of the eight other live versions (not counting the 2014 concerts) in the official catalog. New York City Serenade is one for the ages, though (and we can be forgiven for wishing Sancious had played the opening piano solo.) The majesty of the composition and the across-the-board musicianship make the rendition essential; when the Roma Sinfonnietta begins playing, an elegy under a vocally transported Springsteen (he becomes ageless), it’s pure bliss.

Arizona State University, Tempe 1980 was released just a few days after Ippodromo Delle Capannelle, a Christmas present from out of the blue (present indeed: it was free). It collects the ten tracks missing from the video material included with The River box set. As an album, or any collection of songs, it’s a strange set: 58 minutes of material that originally filled the middle of a live set, neither beginning nor end. And that’s why it’s so compelling. Based on what we’ve heard from the archive releases so far, The River marked the actual highpoint of Bruce Springsteen & The E Street Band. We got Nassau Coliseum back in March, and now another slice of 1980, just two months prior.

Absent the crowd-pleasers and chestnuts, Tempe 1980 plays like distilled “essence-of-Springsteen.” (As bonus, the versions of The Ties That Bind, Stolen Car and Point Blank turn out to be the first official live renditions of those songs.) Depending on your point-of-view, the timing of the release was either great (Christmas!) or not so much – the Ippodromo Delle Capannelle set pales in comparison, both in terms of performance and production. To boot, the Arizona State set was free. They’re both worth your time, but if you wanted to introduce someone who didn’t know Springsteen to his work, there’s now a definitive choice. Ten middle-set songs by a band playing as well as they ever would, among the best mixed and mastered material in the entire Springsteen archive.