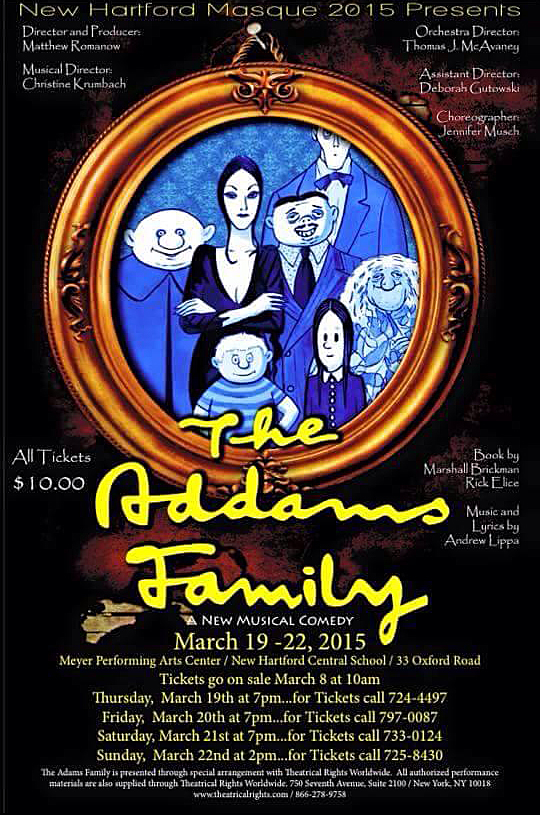 Few events match the annual high school musical for creativity, teamwork, and community involvement. Fitting the myriad pieces together and presenting the show to an audience is a small miracle, a memory that lasts. The biggest sporting events might generate similar enthusiasm, but when we gather for the musical, the kids always win.

Last night the New Hartford High School auditorium was packed to overflowing, which also happened Thursday and seems likely for the rest of the weekend. Holding the curtain for a sold-out crowd is the best kind of theater problem. The audience was rapt from the moment the orchestra played those four opening notes, and snapped along with the floating arm that materialized through the curtain. They roared and cheered at the macabre Charles Addams humor (one bondage scene might have been captioned “Fifty Shades of Addams”), but saved their biggest applause for jokes that targeted modern teens (Pugsley: I don’t understand your references! Grandma: Then stop the damn texting and pick up a book once in a while!) Addams would have approved.

The costumes were outstanding. (Kay Roberts, Jill Brooks, Beth Rice, Susan Mojave, Mary Carole Griffin, Joan Zumpano, and Jennifer Rust credited.) I was particularly impressed by the color coordination and variety across the large cast of “Ancestors” (a clever term for the ensemble.) Complementing the wardrobe was Sarah Spiwak’s well-realized makeup. I also have to single out Bambi Rowland’s program as a work of art – the best I’ve seen in a long time, anywhere. The pit orchestra, conducted by Thomas J. McAvaney, was predictably top notch, and included five students. I did wish for more student involvement in the orchestra and some of the technical departments – like many high school productions, the focus tends to be on student actors, leaving some educational opportunities unrealized.

Tickets for this show are not easy to get. (I mean that literally – if you want to try, make note of the corresponding phone number on the poster above.) If you’re lucky enough to attend, you’re certain to be delighted by the songs and spectacle. Congratulations to New Hartford Masque on another successful show!