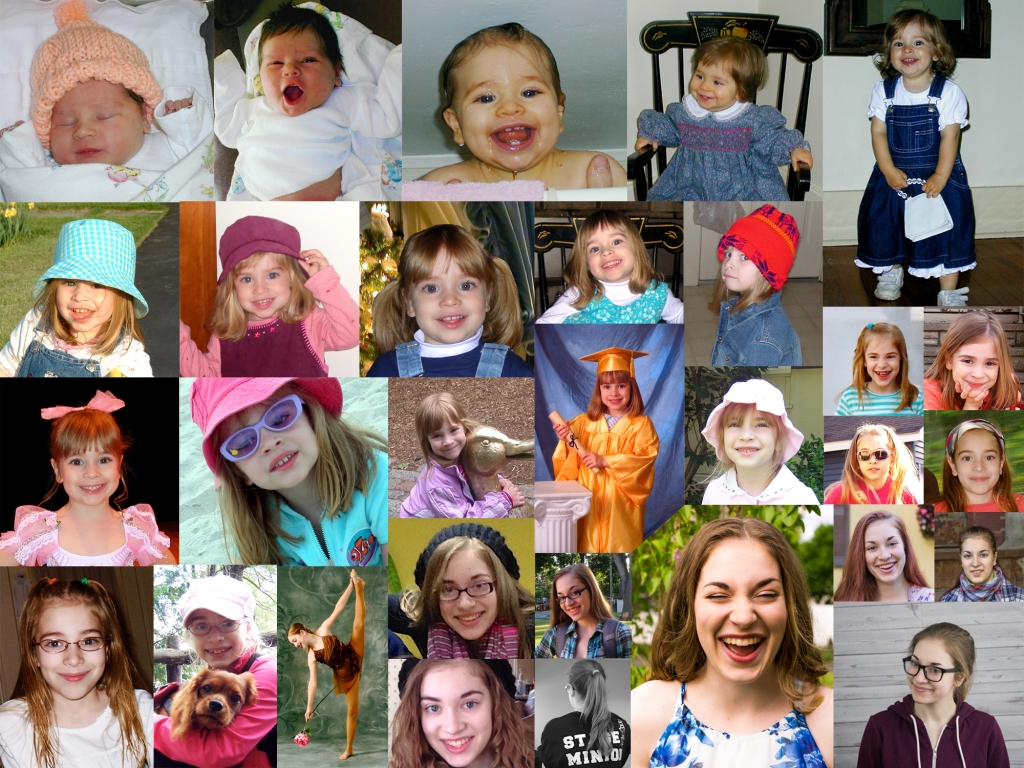 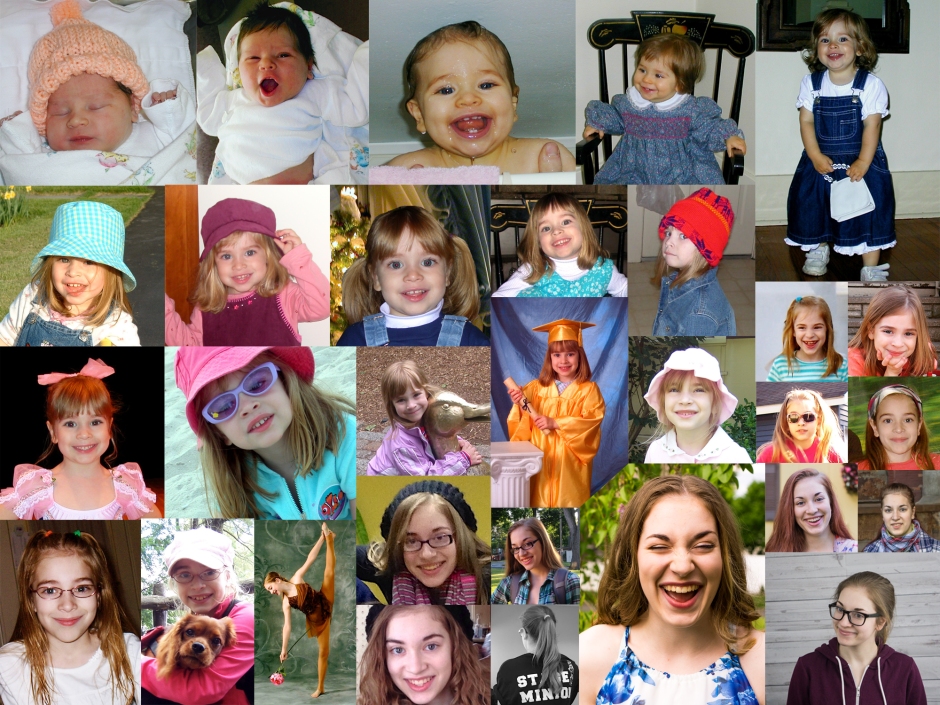 Well, here we are. Your second pregnancy, the happy, healthy baby girl you’d been wishing for, culminated 18 years ago today. (She was healthy, at least.) It was sunny and unseasonably warm, much like the weather we’ve had this week. You asked “How does today sound for a birthday?” I started cleaning.

She was early – your doctor was on vacation, replaced by a boisterous giant. “We’re having a baby today! You should get the drugs!” You didn’t want the drugs. Ten hours later, while you shivered in agony, he cried “I told you to get the drugs!” Uncle Jim appeared at the door every fifteen minutes or so, looking fraught. She finally came out at 8:50 PM, which seems like the middle of the night in my recollection. February 22, 2000. Washington’s birthday. Always in the middle of February break, which meant we never had to send treats to school.

We wanted a Bible name, either Rebecca or Sarah. You decided Sarah because you didn’t want her called Becky Bord. She was a biter, but she only went after you. More problematic was that she didn’t sleep through the night for three whole years. Remember driving around the block, then bouncing her chair on the bed between us? (For what it’s worth, I don’t ever want to sing Kumbaya again.) Dozens of church friends illustrated the abject pointlessness of prayer requests, until one day Sarah finally went the distance. I ran into her room, panicked that she’d died.

She never liked school. Do you remember all of the parent-teacher conferences, when we’d hear glowing reports about a kid who clearly was not ours? She’d come home furious every day, raging and spitting about one thing or another, then she’d put her angel face back on to tackle the world again. (Remind me – have we ever seen that angel?) We rarely saw her do homework, and we didn’t dare ask, but it seemed to be getting done. Fiercely independent, our kid, and doing it her own way, thanks but no thanks.

It was probably inevitable that you and I would produce a child who’d be at home in the theater. After all, we met in Strebel Auditorium at UC, and became friends over the headset during A Chorus Line at the Capitol. At Sarah’s first dance recital, when the curtain went up and most of the kids froze, her face lit up with delight. She endured the lessons for that moment on stage every year.

June 2012 was the real beginning, I think. I was Nicky in Avenue Q, and we needed a puppet wrangler. I called you, and you dropped off our preteen. The director was nervous that she’d see the puppet sex scenes, to which you replied “Oh, please.” Nothing was censored in our house, ears and eyes were never covered. (I’d shown her Spielberg’s The Color Purple when she was four, and answered every question she asked.) One show led to another. The kid who hated reading books, who had no patience for most movies, for some reason had no trouble watching Our Town, one of the world’s true slogs, every night for a month. That’s when I knew she was in it for the long haul.

Sarah is one of the few people I know who can do pretty much anything in the theater. Props, costumes, deckhand, stage manager, lights, sound… (Just don’t ask her to clean the bathrooms.) But not only backstage. On her 16th birthday, she played Cécile in Les Liaisons Dangereuses, and took our breath away. We’d never heard her run lines, and barely recognized her on stage. Then for her 17th, she was Agnes of God. She did wonderfully, but what surprised us most was that again, we hadn’t seen the process.

Sometime last year, Sarah texted us, “I got an internship. I won’t be home for dinner.” She’s been working at the Stanley since, adding front of house to her repertoire. She’s spent more time in that theater now than I have in 28 years combined. Then she got herself into college – Emerson, her only choice, only application, wouldn’t even let us read the essay. BFA in Stage Management. You took her to the portfolio review, and I’m not sure you ever saw the portfolio. Good grief. I’m jealous – I wish I’d gone to school for theater.

Last week, I watched our daughter corral a group of 150 high school students from four different schools, command their silence, and run them through a bow routine for the first time. From start to finish, it took less than 15 minutes. She did this with no assistance from teachers, while the other stagehands and I looked on mutely. One of the students asked, “Can you come to our school, and yell at our crew?” Wow.

Susan, I’m looking forward to driving to Boston with you, to be surprised by our daughter over the next four years. I don’t think she’ll be home much once that starts, and I think that’s OK. We said our job was to raise a self-sufficient, contributing member of society; mission accomplished.

I love you, and I’m happy with what we’ve wrought.

Holy shit, 18. Now you can vote, and we know you will. You’ve got some work to do, for sure, undoing mistakes we’ve made, but I’m confident you and your generation are up to the task. Love is love, a creed you place above money, above religion, and live out daily. Don’t ever stop.

Always be honest. Work hard. Give more than you receive. Proactive responsibility is better than guilt. Tip well. Don’t forget you have AAA. You know these things. (But would it kill you to make a checklist once in a while?)

We love you, we’re proud of you, you’ve surprised and delighted us. You’ve also driven us crazy. That’s OK.

Go and do great things.