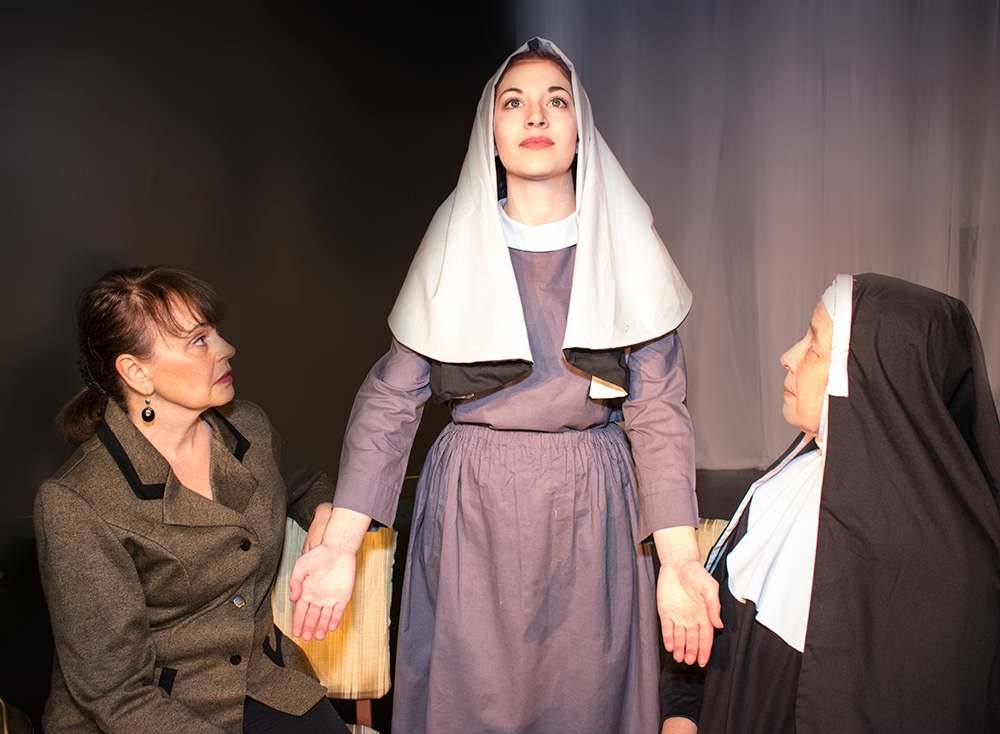 A handful of days before her birthday, I sat in an audience and watched my daughter perform a piece of theater that confounded me; par for the course with Sarah. She’d auditioned for and won the title role in Players of Utica’s Agnes of God, a script I lump with On Golden Pond and Steel Magnolias as 1980s-era tripe, underwritten and overdone. The production was a mess, the three actresses occupying different universes, but what interested me was how Sarah leveraged the material to expose something raw and immediate – John Pielmeier’s Hallmark psychology suddenly beside the point. And here’s the thing: I hadn’t heard a single line of dialogue in the house, hadn’t heard her rehearsing the songs she’d perform as a novice nun with the “voice of an angel,” a cappella and in Latin, no less. (When she was offered the part, my first question was, had the director heard her sing? He hadn’t.) It wasn’t just that Sarah floored me – it’s the material she did it with.

It’s become a birthday tradition that Susan and I should be surprised by Sarah onstage. She celebrated Sweet Sixteen during a run of Les Liaisons Dangereuses, playing Cécile, raped by Valmont. Sarah compartmentalizes – we didn’t overhear her practicing then either, in fact barely recognized the young woman on stage. That’s as it should be, of course (the miracle of theater, and all that.) Sarah is proudly anti-Method – she likes the story wherein Laurence Olivier dismisses Dustin Hoffman’s self-induced sleep deprivation on Marathon Man (1976) with the bon mot “It’s called acting, dear boy.” But when Sarah’s character was accosted onstage, when she screamed… That was scary real. To her parents, sure, but also to the rest of the audience.

A year before that, I was overseeing a ballet recital in a college auditorium. The crew wanted someone to call their cues during the performance – I would be occupied on the fly, so I couldn’t do it. With a few hours’ notice, Sarah came in, watched the dress rehearsal, then put on a headset and called the show. I listened in, because she had to call my cues, too. Again, I didn’t recognize the voice. Think about that – a high school freshman confidently telling a crew of obedient adults what to do. The show went off without a hitch. (I’ve been calling cues since my 20s, but as far as I can remember, Sarah never heard me do it.)

This past weekend, Sarah was stage manager for her high school production of West Side Story. She was fierce and unforgiving. When set pieces were left onstage during a change opening night, she sputtered furiously. When it happened again the next night, she made the crew rehearse the change twice before the next performance. That’s not me, at all – I want everyone happy, so I’m willing to accept the occasional crappy work (who am I to impose?) I defend my approach, of course – management is about getting work accomplished via other people; but I can’t argue that Sarah’s results aren’t better. After the Friday performance, I was ready to go out with the cast and crew (I was fly captain, and advisor to the student lighting designers.) Sarah said, “I just spent two weeks yelling at those people. They don’t want to see me, and I need to unwind.” We picked a different restaurant.

Last night, Susan and I discussed our daughter. I’d taken issue with some snark I’d detected on a paper for school; Sarah disagreed (of course). I’d questioned whether Sarah was a “social justice warrior.” Susan, as always, walked the line: “Sometimes, saying what others are reluctant to say is worth it, even if it’s not the way you’d do it.” (I condense.) Susan was right. For all the post-Trump talk about the supposed virtues of speaking one’s true mind, I remain locked in Jimmy Carter-era liberal civility. Sarah doesn’t hesitate to call adults on their bullshit, regardless of how highly they regard themselves. In this example, Susan made me see that my definition of “warrior” might not be inclusive enough. Last night, I realized that being confounded by one’s offspring might be OK after all.