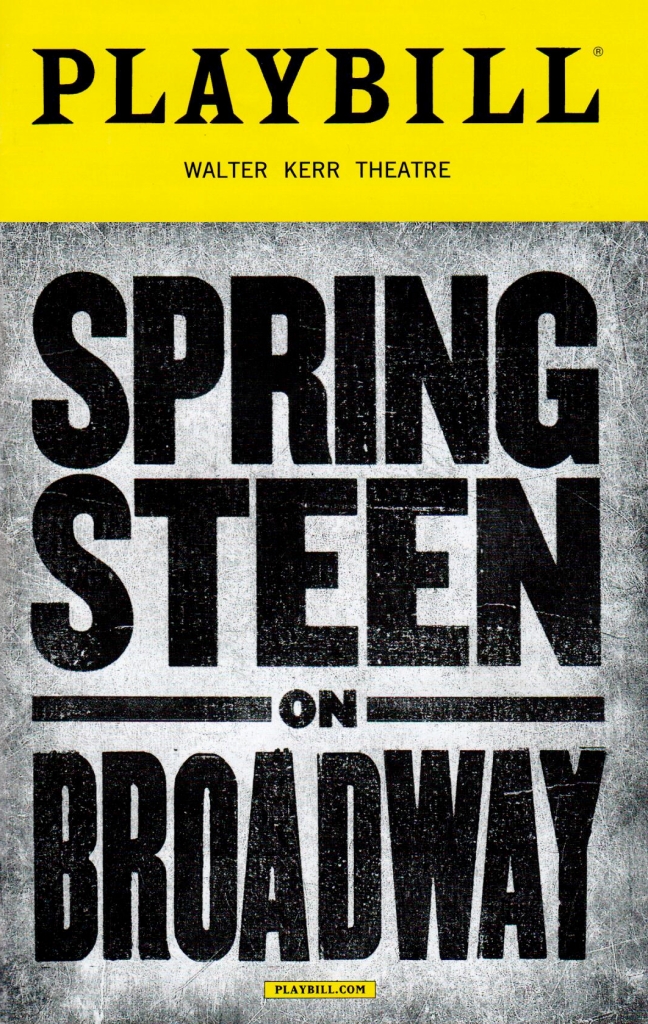 On December 14, 2017, I sat in the second row mezzanine at Walter Kerr Theatre, about 60 feet from Bruce Springsteen. It was the closest I’d ever been, and the clearest I’d heard him over ten concerts I’ve attended. Unfortunately, it was my least favorite of his shows.

Springsteen’s 2016 memoir Born to Run surprised me; I thought I knew the stories, from previous biographies and hundreds of magazine articles, also Springsteen’s spoken interludes on recordings. Did I want to read another book about Springsteen? The writer’s voice is what made the difference, the captivating rhythm of his prose (it’s as good as his best song lyrics, and better than most of them.) The concept of an intimate theater performance, part concert and part recitation, intrigued me.

My first inkling of something awry came when Springsteen started to read. Although known as a gifted storyteller, he’s not a great orator – the more he sticks to the script, the more his voice flattens and lazes, like a middle schooler in front of class against his will. Early in the show, Springsteen mentioned that his present residency was the first regular job he’d ever held, working set hours every day. “And I. Don’t. Like it.” Yeah, that was evident.

For those who follow Springsteen, as I have for almost 40 years, part of his appeal is how hard he works to connect with an audience. He’s known for changing setlists on the fly, and he prowls the stage relentlessly to engage every last person in the audience, every single time. The Broadway show was the first I’ve seen Springsteen disconnected from the crowd – when he read from the prompter, which was a lot, he didn’t look out or around. This engagement problem was exacerbated because Springsteen occupied just two places on stage – center, at a stand microphone, and stage left, seated behind a piano. He moved between those in a somnolent shuffle, appearing shockingly like the 68 year-old he is.

The static and visually dull staging would have been helped by a real director. Springsteen is given program credit as writer, director, and star, which could be intended to increase his chance of winning a Tony award (and sure, maybe there wasn’t anyone brave enough to say “Bad idea, Boss.”) Springsteen is not a trained stage performer – for all his charisma and experience on rock stages, he could have used some guidance on how to occupy a theatrical space, and also vocal delivery. I wish he’d played electric guitar, in addition to the acoustics and piano. Most of all, although Springsteen is a capable solo performer, he’s most revered as a band leader (no accident, that nickname.) Adding band members as the show progressed would have provided narrative, visual as well as sonic variety, and much-needed backbone to his star turn.

Natasha Katz’s lighting never got better than the preset we saw before the show. This was uniquely disappointing for me – given the opportunity to design for a predictable list of songs and a permanent set, I expected more than a monotonous sepia palette, gloomy echo of Springsteen’s low key performance; the transitional fades were inelegant to boot. (If you’ve seen the DVD of Darkness on the Edge of Town performed in the empty Paramount Theatre in 2009, the feel is similar.) Sound design was mostly outstanding, clear and precise, but it was unforgivably marred by constant fan noise, which I think came from some of the truss-mounted lighting fixtures. There were ways to eliminate that distraction, had anyone cared enough.

A recurring theme in Springsteen’s memoir, which also opens and closes the Broadway show, is the idea that his music is a kind of magic trick, “…something out of your hat, out of thin air, out of this world, something that before the faithful were gathered here today was just a song-fueled rumor.” I’d argue the opposite: that Springsteen, of all rock stars, is among the least magical. His appeal has always been how hard he’s working – we see him sweat, and we love him for it.

I can’t begrudge the victory laps Springsteen has started taking over the past few years, not even a valedictory autobiography and Broadway show. I just wish this latest tribute bore more resemblance to the career it celebrates. I wish there was some of the goofy joy that runs through Springsteen’s work, leavening his self-seriousness. I wish he’d gotten more help putting on the show. I wish we’d seen more of his face (and the band!) Mostly, I wish we’d seen some sweat.