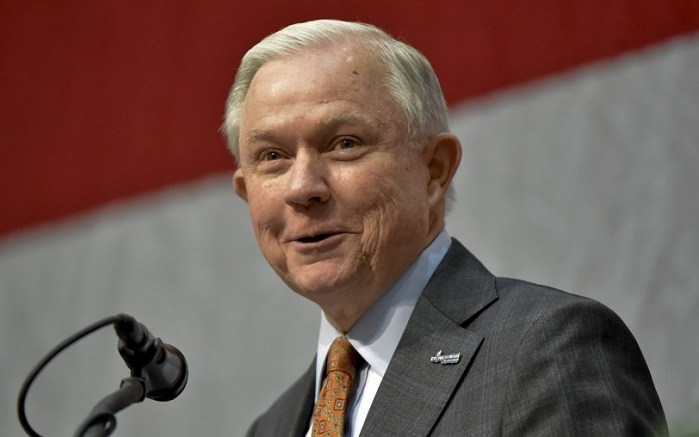 This morning, someone commented on a social media thread I’d participated in. They wrote, “[F]aith is a wonderful thing, but just like teeth, not appreciated until lost [sic].” Like a fortune cookie, that comment meant less than nothing – I had no reply. Consider the post it appeared underneath, from me:

Sen. Sheldon Whitehouse asked Jeff Sessions the other day: “And a secular person has just as good a claim to understanding the truth as a person who is religious, correct?” Sessions responded, “Well, I’m not sure.” That frightens me.

I don’t know about you, but the prospect of Jeff Sessions as Attorney General does NOT remind me of lost teeth. And yes, he frightens me. Why?

Senator Sessions has called the separation of church and state an “extra-constitutional doctrine,” “a recent thing that is unhistorical and unconstitutional.”

Substitute “Islam” for “church.” Should there be a separation of Islam and the U.S state? Absolutely – now, even Trump voters agree with me.

Way back in 1999, I visited the couple who’d taken me in for 18 months when I was a teenager. I’d just remarried; my new wife was with me. Betsy, my second mother, said “Missy and Greg [her daughter and son-in-law, both graduates of Dallas Theological Seminary] believe second marriages are sinful. The Bible says that’s adultery.” ***pause*** “Oh! I just realized that applies to you two. I certainly don’t think of you as being adulterers. I’m sure God is fine with you.”

That was when I started losing my adult teeth – it would take many years to lose the rest; good riddance. During that time, I’ve delved deeply into several Christian faith traditions, and I’ve been burned every single time. It usually took a couple of years, but the result was always the same.

Recently, I was struck with a notion: substitute the word OPINION wherever you find the word FAITH. Think about that – it’s a powerful thought experiment.

Faith based. [Opinion based.]

Which brings us back to Jeff Sessions, and the United States of America. We absolutely NEED to have a legal foundation that is NOT based on Christian tradition, I mean faith, err, OPINION.

I have been part of the following Christian faith traditions: Evangelical, Presbyterian, Pentecostal, Southern Baptist, and Roman Catholic. I’ve served on two Boards of Elders, one Leadership Committee, and one Liturgy Committee. I’ve been Worship Leader in three denominations. I even attended the non-denominational (but oh-so-precisely-defined) Grace Evangelical Society (Once Saved Always Saved, Although Maybe You Weren’t Ever Saved to Begin With) seminary for one semester. I’ve preached in four denominations.

All of which is to say, I know my Christian shit.

We allow people and groups to get away with entirely too much in the name of Faith. Think about it. Church income and property is tax-free. Clergy pays no income tax (for the record, part-time Evangelical and Southern Baptist clergy make three times what their Roman Catholic brethren earn for half the work.) U.S. taxpayers are allowed to deduct 1/3 of their church contributions from their annual tax bills. We subsidize the fuck out of faith. And still, that’s not enough. Hobby Lobby and Roman Catholic hospitals don’t want to pay for birth control, because FAITH, err, their goddamn OPINION says it’s wrong. (Let’s be honest – their pocketbook says it’s wrong. Why not go for it?)

Donald J. Trump’s appointee for Attorney General of the United States says he doesn’t know if he’s ever witnessed discrimination against women or minorities. He also thinks that only people who believe in the exact same God he believes in are able to comprehend Truth.

Put the 17 Christian pastors I’ve served under in one room, and they won’t agree on Truth, either.

At the end of the day, FAITH is, by definition, an OPINION. It is not remotely related to TRUTH, or even TEETH, which serve a useful purpose.

Just before Christmas, another friend re-posted something on Facebook, saying in part: “How does my Faith hurt anybody?”

Answer: Your Opinion hurts people when you try to inscribe it as law. When you deny those who don’t believe like you the right to enter our country, to get married, to have children…

Jeff Sessions should NOT be our country’s next Attorney General. He believes his FAITH gives him a unique understanding of TRUTH. In fact, it’s just his motherfucking OPINION.

Which, as we know, everyone has. Just like TEETH.