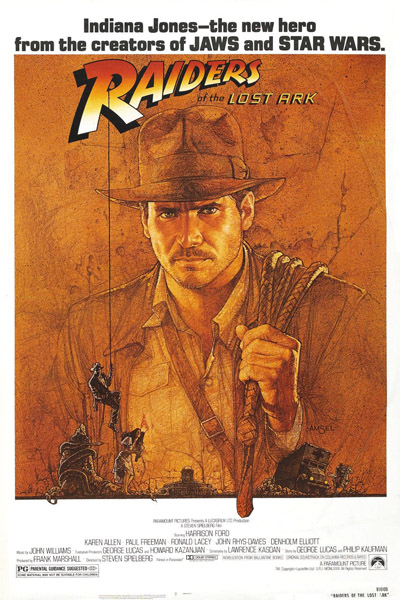 Eighth in a series

It’s interesting to consider Steven Spielberg’s first five movies together, because while his technical proficiency grows by leaps and bounds, his interest in character steadily declines. Perhaps the first doesn’t necessarily crowd out the second, but it’s a distraction, at least. Raiders of the Lost Ark, conceived with George Lucas, is the ultimate pulp homage by two men who see movies as a funhouse and little else.

I thought Close Encounters of the Third Kind (1977) was a euphoric fantasy, because it touched a desire for transcendence that dreamers hope for in movies. Although Richard Dreyfuss’ Roy Neary wasn’t fully developed, the audience could relate to his longing. 1941 (1979) was a mess – the director was already self-parodying (expertly, yet with out-of-phase timing and no sense of tone.)

Raiders of the Lost Ark was finished ahead of schedule and under budget, a first for Spielberg. He seems to have known exactly what he intended, then captured and delivered it with startling confidence. Almost every shot at least references another movie, while many are lifted directly. Michael Kahn’s editing, on his third project for Spielberg, seems to be an extension of the director’s mind at this point. For once, John Williams’ music doesn’t overwhelm the proceedings – rather than ask Williams to tone it down, Spielberg ramps everything up to the composer’s level. Each component of the production seems machine-tooled to thrill, and everything dovetails beautifully; unlike 1941, it succeeds more than it fails.

Still. OK. Raiders of the Lost Ark wants to excite me, and it does, but I miss the human spirit of Close Encounters, and The Sugarland Express (1974). The body count in Raiders is appallingly high, grotesquely high, given that it’s all supposed to be in fun. The hero blithely dispatches anybody who gets in his way, and we’re not disturbed by those who get shot or impaled or run down or poisoned or melted by the wrath of God. I wonder at the erosion of my spirit by “entertainments” such as this.

Harrison Ford’s very physical, very funny performance is wonderful. His put-upon “here we go again” attitude is like a comic book update of Bogart’s tough guy. He’s indestructible, but weary. Karen Allen has a great start in the movie, literally drinking a man under the table in her first scene (set in an update of Rick’s Place from Casablanca – speaking of Bogart.) Then she becomes a helpless screaming damsel for the rest of the movie, occasionally dressed up for the pleasure of sweaty men. What a drag. (In six movies, Spielberg remains squeamish about sex – his characters are devoid of lust. Even 1941, with its juvenile sex jokes, had no adult comprehension of the topic.)

The climax of the movie is a special effects-laden howler – over-the-top and ridiculous, except it sets up a fabulous, cynical joke for the end credits, the wittiest image Spielberg’s conceived since Jaws. I used to love Raiders of the Lost Ark, but revisiting it now I’m conflicted. Considering Spielberg film-by-film, it’s his most technically amazing yet, which is what turns us on; but I never realized the director’s compassion and humanity were dwindling with each successive project. Raiders of the Lost Ark is a movie toy – well crafted but heartless. George Lucas never recovered his heart (American Graffiti, 1973, is his modest masterpiece.) Spielberg, on the other hand…

The Adventures of Indiana Smith

George Lucas wrote a story outline in 1973 for what would eventually become Raiders of the Lost Ark. He and filmmaker Philip Kaufman conceived a rough-and-tumble archeologist named Smith, as well as the Ark of the Covenant plot device. Then Lucas made Star Wars (1977). Steven Spielberg visited Lucas in Hawaii shortly after Star Wars had opened, while Spielberg was still finishing Close Encounters of the Third Kind (1977). Lucas wanted to make a movie that recalled the serials from his youth (that’s also where Stars Wars came from.) Spielberg loved the idea. Apparently, Spielberg’s ambition at the time was to direct a James Bond film – Raiders may have emerged because he wasn’t asked. Lucas and Spielberg sat with screenwriter Lawrence Kasdan and they brainstormed the movie together. “[E]ach cliffhanger is better than the one before,” says Spielberg, on a recording of the session. “What we’re doing here, really, is designing a ride at Disneyland.” 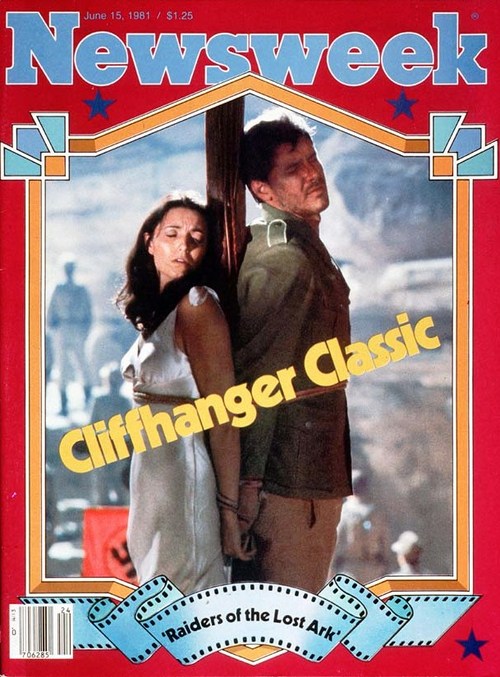 I first saw Raiders of the Lost Ark on a giant screen in an old movie palace in Lake Placid, NY. I’d read everything I could about the movie before it came out – fanzines, comic books, even Newsweek (I still have that copy.) I’d never seen the old serials that Spielberg copied, often on a shot-by-shot basis. (Spielberg says he “didn’t think” while shooting Raiders; based on the evidence of side-by-side compilations from people with too much time on their hands, he might not have.) The movie really is like a ride at Disneyland – in a sense it damaged my expectation of what a movie should provide (it certainly damaged any number of filmmakers and studio executives, and has arguably contributed to the ruination of the summer moviegoing season.) I still remember the impact of being swept along by the images and the music, the smell of popcorn in the air.

We’d gone to the movies that night because we’d been camping, and it had been raining. My father was eager to see Raiders, having provided most of my reading material leading up to its release. I knew there were parts I had to prevent my brother from seeing: dead bodies impaled on spears, tarantulas, snakes, and especially the melting face near the end. I mis-timed my hand in front of his eyes, though, because he saw that face melt. Later, in our tent, the rain pelting just inches above our heads, my brother succumbed to the horror of that face. Fueled by the popcorn and candy he’d eaten, he vomited on my sleeping bag.

That’s when I smelled it. Then I put my hand in it, as I felt around in the dark for the flashlight.

“Brian, were you ALREADY sick?”

He’d fallen back to sleep. Now I was feeling sick. I found my shoes and left the tent, walked through the rain to the picnic table, which was somewhat protected by a tarp. That’s where I stayed until morning.

Remnants of the Last Puke.