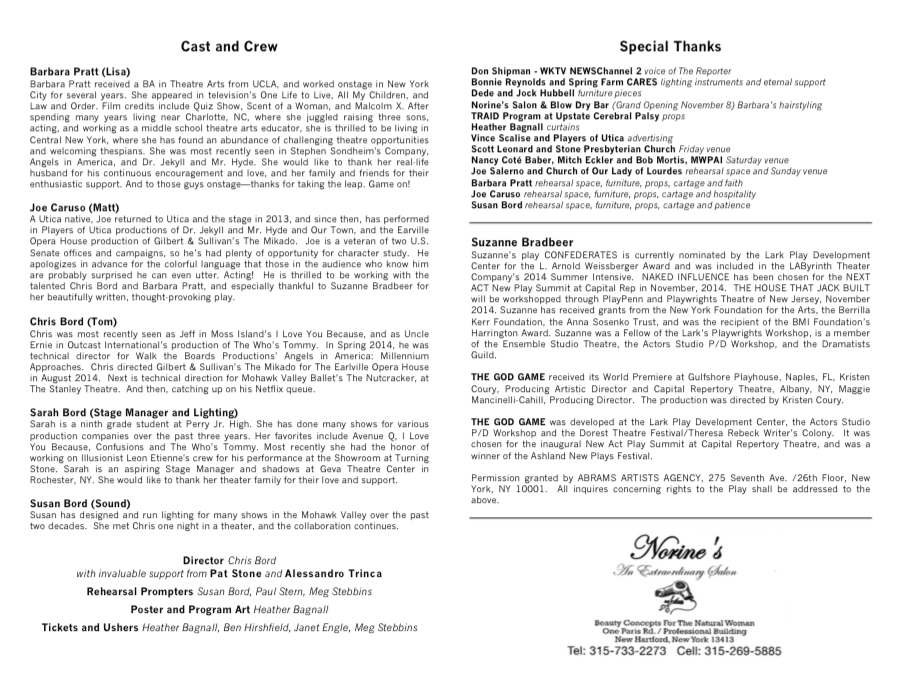 Putting on a theater show is like running a marathon. I can speak to this because I’ve done both. A show is harder, but the comparison applies. It’s a long process. It costs more than you thought it would. There are times you’d like to quit. The push to the finish is all-consuming. And once it’s done, nobody can take it away from you.

Sometime back in the summer, I was having a beer with Joe Caruso (these stories often begin with a beer, note-to-self), and he mentioned a play he’d seen in Albany, The God Game. He said he’d love to play the part of the political operative, which would be right in his ballpark and yet a stretch. I asked him to get us a copy of the script to read. It arrived in early August, just as I was finishing The Mikado for The Earlville Opera House. The God Game seemed like it would be easy by comparison – just three characters, no music, a simple set. The message was timely and I liked the writing. But it sure as hell wasn’t easy.

I sent an advance payment to secure the rights for the play, and we were locked in. Joe would play the operative, and he’d selected Barbara, a former castmate, to play the part of the wife. We needed a senator. I didn’t think it would be a problem, because I had three great local actors in mind for the part. All three turned me down. On the day of our first read-through, I told Joe and Barbara: “I hope you talk me out of this, but I’m the fallback choice for the senator.” And so I ended up taking on the most challenging part of my acting career.

I like short rehearsal periods, with long preparation windows. I produced a musical last winter, I Love You Because, in three weeks – but the actors had their materials two months ahead of time. Learn your stuff on your own, and show up prepared. Duke Ellington reportedly said, “I don’t need time, I need a deadline.” I love this quote. So I made my flashcards and started memorizing lines. I made 676 cards, half of which were mine – 338 bits to cram into my head, ranging from one word to several sentences each.

This is where generous and understanding family members help. Susan and I met twenty years ago in the Utica College theater, and our paths crossed in many other theaters before we formalized our partnership. She’s always run lines with me, and we’ve had scripts with us on more than one vacation. This one required her to read almost every line in the play that wasn’t mine, and a full practice required over an hour at a time – sometimes we’d run it three times a day. (Add to that her duties as sound board operator for the performances. I still haven’t paid her – better think of something.) Susan is a stickler for delivering a line as written, with no addition or subtraction – I believe in this approach, although it was frustrating and prompted many petulant outbursts by me.

At the same time, I was booking performance venues, developing advertisements, scheduling rehearsal space, buying props, designing sound and lighting, etc. (And working a full time job to pay the bills.) Here’s a good rule of thumb – whatever you expect to pay on a show, double it. Whatever time you think you’ll spend, triple it. I keep a budgeting spreadsheet, and the initial go/no-go decision is based on estimated expenses versus estimated ticket buyers. I have a formula that figures out the break-even number of ticket buyers at a given price, and that number went from 50 to 98 as we prepared for The God Game. (By comparison, the musical I Love You Because started at 102 tickets and eventually hit 240.)

Orson Welles did brilliant work as a writer/director/producer/performer; most of us aren’t at his level. I was fortunate to get the help of two director friends who were willing to take a look at several rehearsals and offer feedback. Still, I’m under no illusion that my work in any capacity wouldn’t have improved if I’d been able to outsource other tasks.

This project was, in hindsight, absurdly ambitious. It had looked simple from a distance, but I couldn’t find a performance venue that was available for an entire weekend at the price needed. We ended up in three spaces: Stone Church in Clinton, Munson-Williams-Proctor Arts Institute, and The Seton Center at Our Lady of Lourdes. Three different venues that averaged out to the right price, in the timeframe I was licensed for. My original set concept was three chairs and a table, which grew during rehearsals to four chairs, a table and a desk, plus assorted pictures and decorations. It would have all fit in a cargo van, but that would have cost over $200, so we transported in our own vehicles. We rehearsed in four different spaces.

Susan and I carried the lights, sound and props in our vehicles; Joe and Barbara stuffed the furniture into theirs. The show took two hours to set up, and by the end we could manage the teardown in 25 minutes (it started at an hour.) That’s not bad, until you consider the actors were also stagehands, with day jobs. And a lot of lines to remember. I’m not sure any of us were able to give the focus we should have to our acting tasks. And I’m not saying the acting was poor – in fact, it exceeded what I’d anticipated. I personally gave what I consider my best performance, and I was certainly outclassed by my castmates. But we had a lot on our plates.

I learned a lot as a director on this one. Because The God Game is driven by dialogue, I’d focused on the interactions between the characters. I didn’t think blocking would be an issue – move people only as needed. Pat Stone and Alessandro Trinca helped me to see the problem in this, and they especially helped me to realize that blocking a dialogue-heavy piece with three actors poses its own unique challenges. Naturalism on stage requires a lot of work. (Another note-to-self.)

Our audiences were small but appreciative. I’m not yet sure how to crack the mystery of gathering an audience in Utica, NY. (I’m reminded that plenty of theater companies face the same issue, even in the biggest cities.) In any case, we got half the number needed for break-even, similar to I Love You Because. I wish I could have offered everyone beer – need to apply for that license.

Putting on a show is like running a marathon in so many ways. Upon finishing, I always say I won’t run another. Three days later, I’m looking at the calendar. I’m already itching for the next project.

© Chris Bord and Moss Island LLC, 2019. Unauthorized use and/or duplication of this material without express and written permission from this blog’s author and/or owner is strictly prohibited. Excerpts and links may be used, provided that full and clear credit is given to Chris Bord and Moss Island Sounds with appropriate and specific direction to the original content.