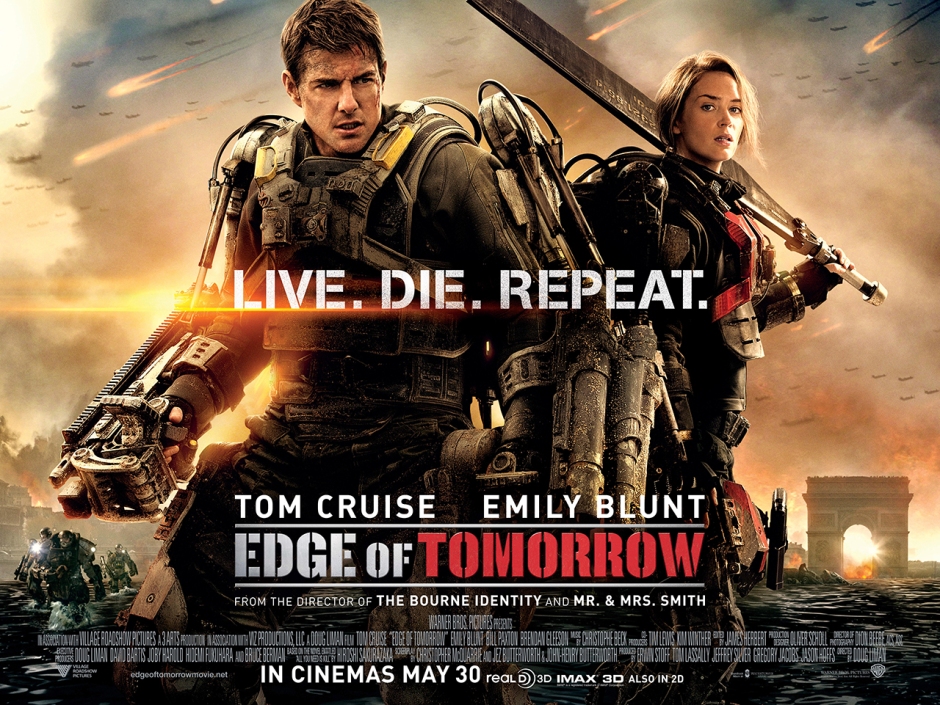 I can imagine the pitch for Edge of Tomorrow, or as it seems to have been retitled, Live Die Repeat: Edge of Tomorrow (considerably less elegant but at least now it won’t be mistaken for a daytime soap):

Actually, it’s Groundhog Day crossed with Starship Troopers, lacking the wit of either (the comment applies whether or not you find either film witty.) And it does star Tom Cruise, in addition to Emily Blunt, both of whom could have been replaced, mixed or matched with any assortment of current movie faces with no discernible change in the finished product. The movie is dumb, loud, and generic as a corporate balance sheet.

As usual in spectacles like these, the effects teams run away with the show. Doug Liman doesn’t seem to have directed as much as coordinated, and he’s hostage to studio expectations for this kind of product. Make it loud, make it flashy, make it 3D. I liked Liman’s Bourne Identity, and I liked the subsequent Mr. and Mrs. Smith even more. Both of those allowed their stars to carry the day, in ways that Cruise and Blunt can’t manage here.

The plot is nonsense, and it tends to over-explain itself, which makes things worse (Groundhog Day didn’t care about WHY, which proves the better approach.) Christophe Beck’s music is an ever-present bludgeon, always too much and yet never enough. Like the visual and sound effects, it seems to have been produced by template, easily transferred from or into any other film.

As a final note, I’ve never been one to buy into the idea that Hollywood movies promote gun violence in society. However, Edge of Tomorrow certainly perpetuates the tradition of guns being the answer to most problems. It gets its audience pumped up using the spectacle of blasting our enemies away. It may or may not cause gun violence, but it certainly inhibits solutions that limit access to guns. After all, we might need our guns to repel an alien invasion. And wouldn’t that be exciting?