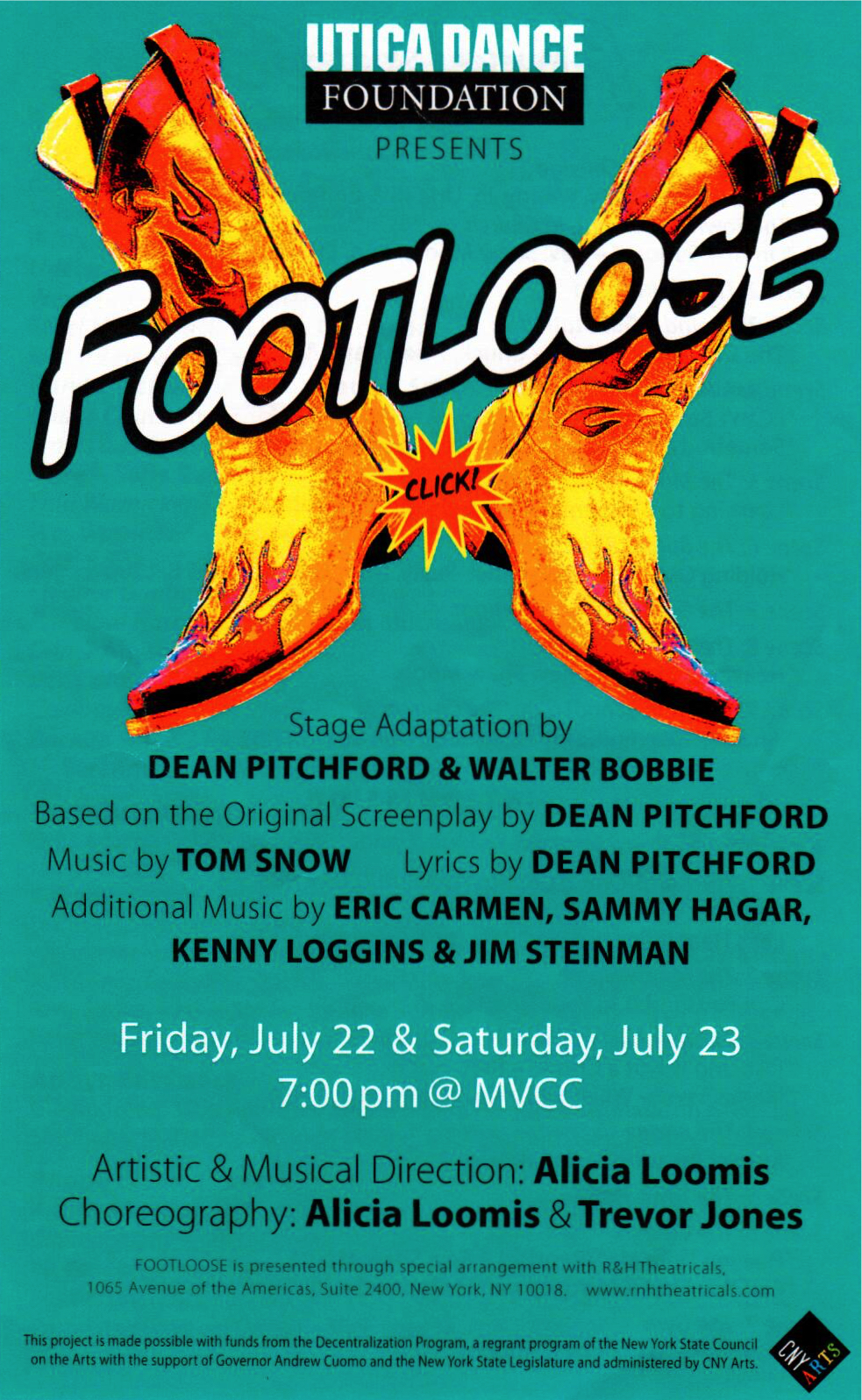 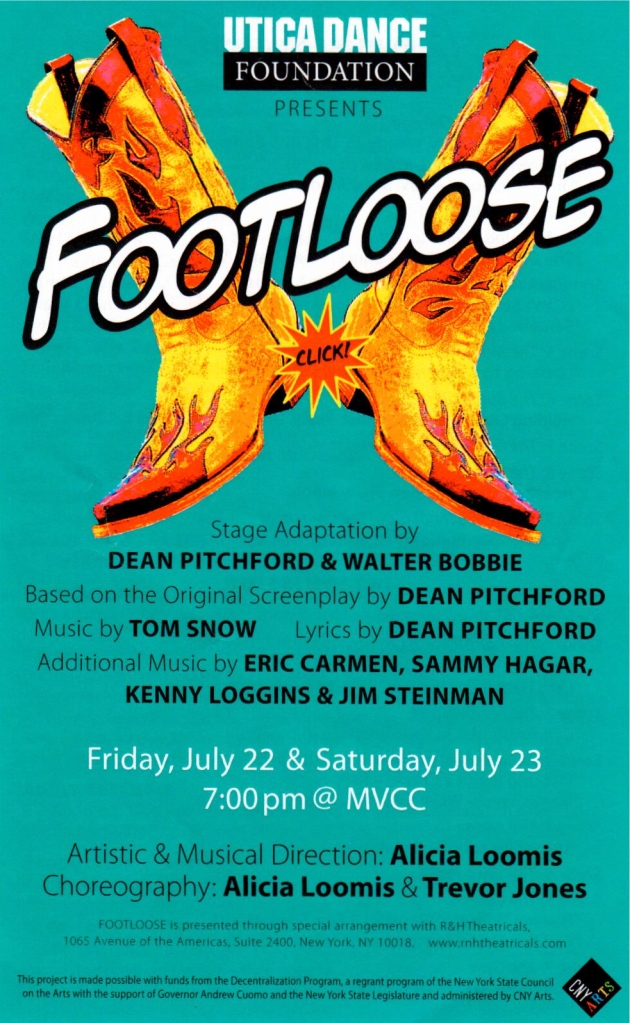 When the movie Footloose was released in 1984, I was in the audience. Even to a teenager, it was obviously a vehicle to sell soundtrack albums – we didn’t walk out saying, “That would make a great Broadway show.” Fourteen years later, somebody had a different thought. Turns out, it doesn’t make a great show, but Footloose continues a recent trend of middling movies that have enough name recognition to boost ticket sales.

Footloose is nominally a fish-out-of-water story, with young Ren moving from the city to the boondocks with his newly single mother. Ren is startled to find a community so backward, rock music and dancing have been outlawed. Of course, Ren saves the day, eventually freeing the town from misguided religious oppression. The movie was a product of the 1980s – the music is slick pop, not rock, but whatever.

The stage musical boosts the role of Reverend Moore, the preacher who established and perpetuates the town’s moral code. He’s positioned as counterpoint to Ren – both have lost family members. Alas, there’s never any doubt that Rev is wrong and Ren is right. (Oppression is bad, so is being disconnected from your kids.) Dancing returns, the spirit of youth triumphant. With the outcome preordained, there’s no dramatic tension. Inexplicably, the two main conflicts, Rev v. Ren and Ren v. delinquent rival Chuck, are both resolved offstage. (Chuck is practically absent from the second act.)

What’s left? Dean Pitchford’s book is instantly forgettable, neither profound nor funny, its dialogue a litany of trite exposition. There are a few well-known pop tunes, but the additional songs written for the stage are undistinguished. A hungry choreographer might have an impact, and maybe a set designer with a budget could work some magic (true of most shows, actually.) I don’t know why any theater company would choose this piece, except to cravenly sell tickets. That’s not necessarily disqualifying, because cravenly selling tickets keeps companies afloat. The question then becomes, is there a greater good?

I was surprised to enjoy Utica Dance’s production of Aida, presented in July, 2015. I liked that the performers rose above mediocre material, and I thought the choreography, set, and costumes were very good. In my review, I suggested the group might add a pit to their next show, and sure enough, Footloose had real musicians. But here’s the thing: 80s pop music depends on studio embellishment for its sound – the Footloose songs just don’t have the bones of The Who’s Tommy, for example. The band assembled for Footloose had plenty of talent, but the sound was thin and rhythms awkward, often out of synch with the performers. The company occasionally rose to the occasion, with some nice harmonies on The Girl Gets Around and decent comic delivery on Mama Says. Ciara Wiggins cut loose with a powerful solo on the Oscar-nominated Let’s Hear it For the Boy, despite its being awkwardly shoehorned into the story. Unfortunately, the hit ballad Almost Paradise was dead on arrival, the singers struggling with meter and jumping octaves, losing track of their notes in the process.

Trevor Jones was co-choreographer on both Aida and Footloose, but although I found his work on Aida striking, Footloose had too many generic moves, repeated in symmetrical full-stage configurations. (Jones was again a featured dancer, his signature mohawk haircut visually discordant in the supposedly repressed environment.) One of my companions put her finger on the problem: “I hate it when musicals say a character can’t dance, then two minutes later they magically do all of the moves.” (Take note: Christina D’Amico has been doing terrific work in the Greater Utica area with character-driven choreography.) So – although the choreography and dancing were often good, they didn’t serve the story. The finale was great fun though, especially when a reformed Reverend Moore joined in. (It also contained the only interesting lighting cue, a zero-count blackout on the cast mid-leap.)

The church set by Dick Loomis was nice, with stained glass window and off-center pulpit upstage, angled pews extending in parallel lines downstage. The rest of the production’s sets were less striking, especially a dining room that seemed to have only one wall (given the blocking). The Burger Blast restaurant set required actors to ascend a stairway upstage, then immediately descend to enter the scene – pointless and time consuming, not to mention afoul of the ADA.

Costumes and dialect (uncredited) were just awful. One character, Casey Rice’s Willard, dressed and spoke like a sitcom redneck. He may have taken it too far, but he was the only one even trying. The stage lighting (also uncredited) was bright and boring, rarely establishing distinct areas (followspots would have helped), never suggesting light source or time of day; musical numbers had no interior cues to help them build. Sound (again, uncredited) was distant and disconnected, and the levels varied from performer to performer.

(I sat in the forgotten balcony – neither the cast nor the anonymous sound designer seemed to know we were there. Also, while the pre-show announcement was all about how distracting smartphone screens are in a darkened theater, those are NOTHING compared to the door-sized, brightly lit hallway we had to shield our eyes from ALL NIGHT LONG. It’s the details, folks.)

This Utica Dance production seemed to have a lot of “uncredited” credits. Although I’d understand if those workers requested their names be taken off the project, the program lists one name, Alicia Loomis, five separate times. It seems fair to ask: was this a vanity project that got out of hand? Share the work, and for God’s sake, share the damn credit. Dick Loomis is listed three times, and Utica Dance actually gives itself “Special Thanks.” We get it, you’re super special.

I assume the uncredited stage direction was also by Alicia Loomis, but maybe that’s another redaction. The blocking, such as it was, involved moving groups of people into position to declare their lines. Move, plant, deliver, always to each other or to the Orchestra (the balcony didn’t exist.) No reactions from the performers, not a single motivated emotion. They sometimes had glimmers of verve, especially the young principals, but simply weren’t guided. As Reverend Moore, Rusty Ritzel sang well but looked weary, like he wanted to be anywhere else. I imagined a livelier conflict between Moore and Dante Pereto’s Ren – both could have used a shot of passion, should have flown a bit unhinged.

And yet, people bought tickets, and cheered loudly throughout. This kind of entertainment clearly has a place, and I doubt anything I’ve written will find agreement with most of the crowd who enjoyed the performance I attended. (My problem is that this is what we reinforce in Central NY audiences – crap regurgitated musicals over more thought-provoking theater.) Mostly, I’m depressed that what seemed like a promising company has crashed and burned this soon. The cast seemed to be having fun, and there’s nothing wrong with that. Except: there’s better material to spend this much effort on (both credited and anonymous.) The success of Aida guaranteed I’d buy a ticket for Footloose; this production guarantees I’ll do an IMDB check next time.