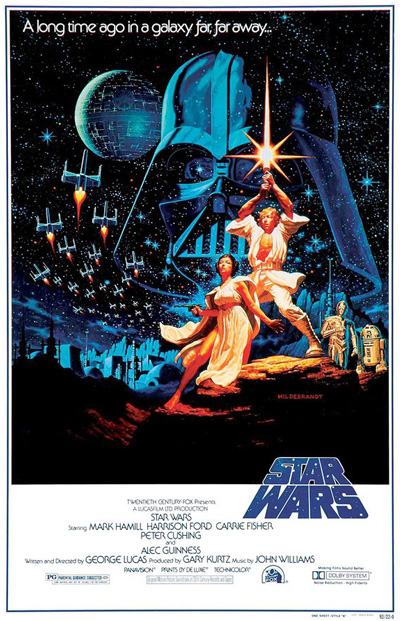 J.J. Abrams’ new Star Wars movie is scheduled to premiere on December 14, 2015. Although I outgrew the movies sometime around puberty (the moment I first watched The Godfather, to be precise), I’ve watched the new trailers as they’ve been released, and my physiological reaction to John Williams’ music is probably similar to every other 40-something sometime geek’s: increased heart rate, loss of peripheral vision (starry eyes), flood of cerebral endorphins… I feel young again.

In 1977, I was seven years old. My friends kept talking about a movie they’d seen, quoting it incessantly. Based on what I thought was slang (“Find the controls that extend the bridge!” “I think I just blasted it.”), my image was of scantily clad black Africans racing through exotic jungles. I kid you not. (My bedtime was 7:00 and I watched very little television. The characters on Star Trek reruns sure didn’t talk that way.)

My first real images of Star Wars (1977) came from trading cards included in plastic sleeves of Wonder Bread – my mother worked the swing shift three times a week, and my father would take us to Friendly’s for clam chowder and Fishamajig sandwiches. The waitresses saved the cards and would dump a pile (with crumbs) on our table every visit. My brother and I collected the entire set several times over.

I think the film must have been out for months before I finally convinced my father to take us to a matinee. Before Star Wars, our family only attended drive-in movies – they were cheaper, and the kids would fall asleep in the back of the station wagon before the end of the first feature. The auditorium had two aisles – we sat on the far right, in a half full house. Popcorn and candy. I parceled mine out, while my brother scarfed his; I wanted to have some left when he was finished. My father noticed and offered a tidbit of his timeless wisdom: “Eat while you’re hungry. Don’t save it, or you’ll have to share it.”

The sound of the 20th Century Fox Fanfare and the opening splash of John Williams’ triumphant theme changed something in my DNA. I still get a warm chill when I hear them together, or anything that evokes them. (The king reportedly stood when he heard Handel’s Hallelujah; Star Wars prompted a similar reaction in me at seven.) In retrospect, Dolby Sound was probably just being rolled out to regional theaters (their optical process was introduced in 1973), so the speaker system was likely the most magnificent thing I’d yet heard in my short life. It must have made a difference.  (Also: Princess Leia’s Theme is certainly the best melody ever written for the French Horn.)

All of it: Carrie Fisher, the most beautiful princess. Harrison Ford, the manliest man (he sure as hell didn’t shoot first, my friends and I never questioned it.) Luke, meh. A bit of a whiner. C3PO was the first homosexual we’d encountered, which certainly paved the way for my generation’s acceptance of same sex marriage. Obi Wan, more powerful in death than we could possibly imagine, would be with us always. (Who needs God?) Bright lights, explosions. There has never been, probably never will be, a movie more ideally suited to the psyche of a seven year-old boy.

While we waited for the second Star Wars movie (rumor had it that 12 had been promised), I read the novelization of the movie, attributed to George Lucas. The cover was delicious but the prose didn’t capture John Dykstra’s astonishing special effects. Glen Larson’s Battlestar Galactica employed Dykstra, and the 1978 series had the attraction of being available free, on television. (Ronald D. Moore’s 2003 BSG reboot is the one to watch – its worldview surpasses anything George Lucas ever depicted or imagined.) I bought the double-LP Star Wars soundtrack album, the second record I ever purchased, after Barry Manilow’s Even Now. My brother and I read the Marvel comic books (drawn by Howard Chaykin), and Alan Dean Foster’s Splinter of the Mind’s Eye. That messed us up (we weren’t ready.)

In early 1980, my father returned from a business trip with the novelization of The Empire Strikes Back, by Donald F. Glut. Its cover (by Roger Kastel) was the most beautiful thing I’d ever seen. I read the book frantically, finishing in less than 24 hours. About 30 pages before the end, I experienced a shattering jolt that still ranks in my lifetime top ten: “Luke, I am your father.” Wait, what?!? Shit, no. “Brian, you gotta hear this!!!” And thus was the spoiler born.

The second Star Wars movie, The Empire Strikes Back (1980), opened on May 17. I was there on opening day, first show. Loews Pittsford, single screen theater, probably the most sacred place of my moviegoing life (other memorable screenings there include first-day showings of Star Trek II, Indiana Jones and the Temple of Doom, Aliens, The Untouchables, not to mention Return of the Jedi.) I went with my best friend, Scott Crosby. My memory says we walked right off the playground at West Avenue Elementary school and into his mother’s wood-paneled station wagon, but that can’t be right. Opening day is all I can guarantee, because by then I was obsessed with movies, Star Wars in particular.

I still consider The Empire Strikes Back the finest Star Wars installment, and it’s the only one the critics I’d started reading seemed to really appreciate. I’ve written before that Peter Suschitzky’s cinematography created sense memories that formed the basis of my lighting design sensibility. Leigh Brackett and Lawrence Kasdan’s screenplay punched up the dialogue beyond Lucas’ original: at 10 years old, it’s what we needed. “I love you.” “I know.”

The cliffhanger was agonizing, of course. By the time Return of the Jedi (1983) came out, I was 13. I’d spent half my life with Star Wars. I knew it took three years to make a movie, that the original title had been Revenge of the Jedi, and I knew I could expect some kind of print version a few weeks ahead of time. (I’ve never minded spoilers.) By 1983, I’d seen The Godfather, and I’d read a lot of movie criticism. We didn’t yet have cable or a Betamax player (that would come in 1984), and video stores were in their infancy (they would require a $125/year membership fee, which my father gladly paid for access to porn.) As a movie consumer in 1983, I was an adult. But as a 13 year-old kid (my actual age), I loved the opening day ritual.

On May 25, I skipped school with Tor Ekeland, Chris May and Dave Mihal; we set up camp near the box office of Loews Pittsford. 8:00 am, but we weren’t first – maybe tenth in line. We had a cooler, sandwiches, blankets and pillows. I think Tor’s father dropped us off – he was older, less inclined to disapprove truancy. The wait was delightful. The TV news crew came, we met likeminded fans who worshipped at the same altar; it was our mini-Woodstock. How could the movie live up to what led up to it? Jedi was a disappointment, not least because of Ewoks or the déjà vu plot. We were growing up. (George Lucas wasn’t.)

Before Star Wars Episode 1 opened in 1999, I’d just set up the computer network at Munson-Williams-Proctor Arts Institute. With our blistering-fast fractional T1 broadband connection, I was able to download the 2-minute trailer in just 30 minutes, as opposed to the 3 hours it would have taken over dialup at home. At the movie theater where I worked as a projectionist, I showed the original trilogy, re-released and desecrated with CGI technology. I brought my kids and my wife, none of whom had ever seen Star Wars; they were unimpressed, and she hasn’t yet forgiven me. (For some people, there’s a certain cachet in being able to claim one has never experienced otherwise ubiquitous bits of pop culture.)

The Phantom Menace was less a disappointment than a yawn, although I can say I watched it on opening day – as a projectionist, I saw it by myself at 4:30 AM. The next two I still haven’t been able to watch without falling asleep. As a critic, I find it amazing that Star Wars has such an enduring impact, on the basis of exactly 1-1/2 good movies out of six. I think John Williams’ music is a huge part of that, and of course the Dolby Sound and Dykstra special effects, which have always seemed more real than CGI because THEY ARE MORE REAL. Now we’re looking forward to another installment (my ten year-old self would point out this will be 7 out of 12.) Lucas is out of the picture, having sold his company to Disney and reduced to asking J.J. Abrams what’s going to happen. Damned if I don’t want to know, too.