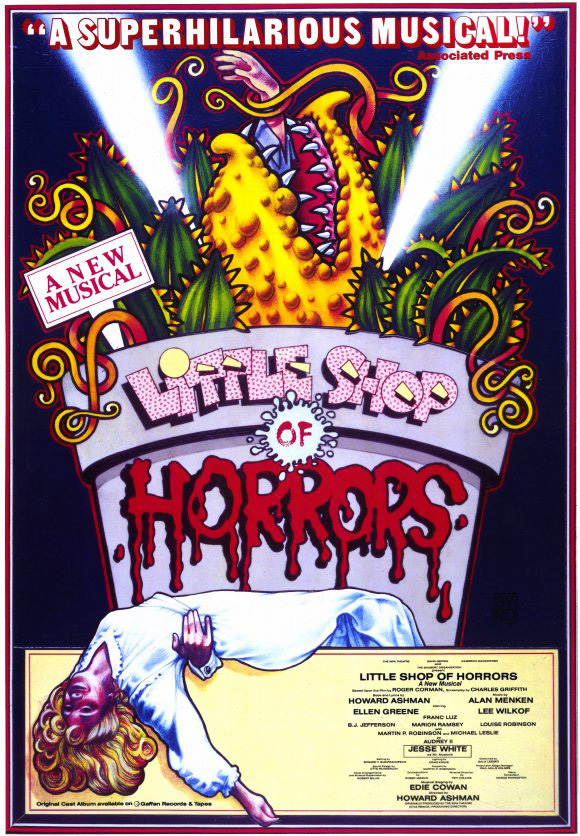 One day, I was discussing dream projects with my friend Jackie Osterman. I’d met Jackie on The World Goes ‘Round, four years earlier. I said I wanted to do Little Shop of Horrors; I’d provided some lighting to a local production of the show a few years earlier, at Rome’s Capitol Theatre. “Do you think they still have the plant?” “I just saw it the other day when I was rummaging in storage – I bet they’d let us use it.” Jackie asked if I wanted to be in the show. “Yeah – believe it or not, I’d love to play Seymour.”

This is what Jackie said: “OK, so you’re Seymour. I have the perfect Audrey – do you know Laurie Bridges? She played the part in Syracuse. We’ll hold auditions but tell people the leads are already cast.” Later, I asked Jackie why she’d decided to do the show and given me the lead, sight unseen and song unheard. “You said you could do it and I believed you.” Many years later, I produced and directed I Love You Because and The God Game, both for performers who wanted a chance similar to the one Jackie had given me. The gift of faith is a powerful thing.

I decided I needed to cut weight – I wasn’t terribly heavy at the time, but I thought Seymour should look malnourished. I ended up dropping 40 pounds, which put me at 165. I was scared out of my mind at the first rehearsal. I’d sung in church, but the Utica theater community knew me as “the lighting guy who never talks to anyone.” What had I talked myself into? (It didn’t help that Seymour wasn’t just my dream role – many young men wanted a shot at the part, and they thought I’d unfairly budged to the front of the line. There were moments I was tempted to hand it all over to the first taker.)

Susan and I vacationed in Maine that summer, and the Little Shop of Horrors script was rehearsed aloud on the front lawns of many bed and breakfasts, most memorably in a “treehouse,” a small deck attached to a giant oak in Bar Harbor, accessed through a tiny window via short ladder from our attic room. Susan is still my go-to line reader, because she won’t accept the slightest deviation from the text and always prompts “one more time.” The theater needs such angels.

I remember the Players of Utica theater cat sitting in on many rehearsals, and Jackie’s toddler son Zach in his stroller (Zach is making movies now.) Our first Audrey II (a dream-voiced high school senior who channeled Motown) dropped out, and my friend Rick Stoodley (a dream-voiced 35 year-old who also channeled Motown) joined the cast. My friend Colleen Loftus, who’d previously kept me loaded with Reese’s PB cup minis on other shows we’d worked, helped operate the plant. We had an ensemble member who always wore military fatigues and hit on the teen girls – Jackie asked him to leave the production and he stormed away shouting, “You’re going to regret this!”

Laurie Bridges was astonishing. If Rick Stoodley incarnated Audrey II, Laurie was Ellen Greene’s twin sister, or maybe her clone. She lived in Syracuse and worked at the makeup counter of a mall department store. I developed a hard theater crush on Laurie – she might have been 10 years older than me, and 30 years more experienced. I drove an hour to visit on her lunch hour and “discuss our characters.” Yeah. There was no intention or desire apart from the stage – I wanted every bit of grace and confidence she had, and hoped it might somehow just rub off on me, if I could just be around her a little bit more. Of course, it doesn’t work that way.

Joe Karam (rest in peace, dear friend) played Mushnik. Joe was physically perfect for the part, from his bugged-out eyes to his strangled old man’s voice – I still crack up when I hear him in memory, even more when I watch the old video of his performance. Joe couldn’t remember lines, blocking or choreography. Every night, we wondered what travesty he’d commit upon the script. During our big dance number, Mushnik and Son, I dragged Joe around the stage and handled the moves for both of us. An audience member commented, “You did well. There should be a local theater award for ‘Best Karam Minder’ – you’d be a strong contender this year.”

Kevin Matthews, physician, played the sadistic dentist. I didn’t appreciate Kevin’s unique comic sensibility in the role until years later. Eventually, I realized Kevin was toying with what he knew to be the expectations of patients in a waiting room, particularly during the number Now (It’s Just the Gas).

Susan ran followspot, of course. I set up the lights and our friend Amy ran the board. It was my first experience of being onstage and completely distracted by the technical aspects of a production – I’d be singing a line, thinking, “There should have been a light change there. Why hasn’t the followspot picked me up yet?” You might think that 17 years later, I’d be better at theatrical multitasking. I’m not. I was also “watching” the performance with a critical eye. I was convinced that Laurie and Rick were dynamite, and the rest of us were struggling to keep up. I didn’t think my lighting was up to my best work. I thought the audience would hate it.

The show sold well. I remember packed houses, particularly the night ALL of my in-laws came, including Susan’s parents, her brother and his wife. (Susan said, “I don’t know if they ever all turned out like that for one of my events.”) Susan told me on opening night, Jackie stood in the booth next to her and said, “He’s just perfect.” The main comment, of course, was “Who knew the lighting guy could sing?” That was nice, but I still wasn’t convinced. I auditioned for another show, shortly after Little Shop, and wasn’t even cast in the ensemble. It would be another 14 years before I tried again.

“When Laurie sang those last few bars right into my face, I couldn’t hear myself anymore.  It’s one of the profound stage experiences of my life.”