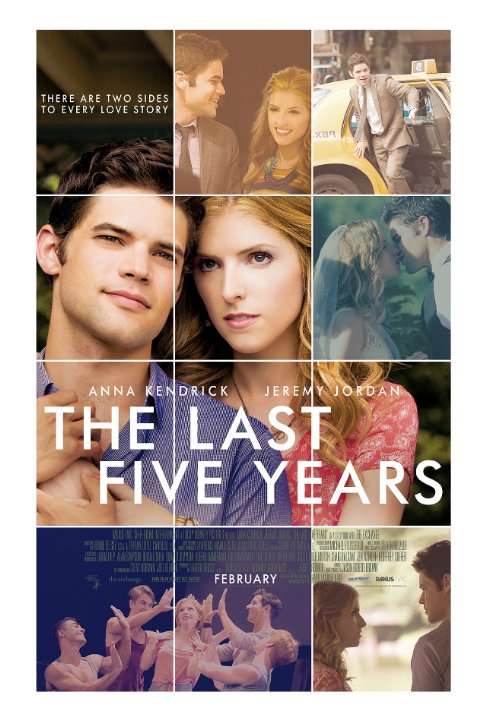 One of my favorite Gary Larson cartoons depicts a man in one panel, thinking “I wonder if she knows I exist… Should I call her?” In the bottom panel, a woman thinks “You know, I think I really like vanilla.” The caption reads, “Same planet, different worlds.”

Richard LaGravenese’s film adaptation of Jason Robert Brown’s musical The Last Five Years reminds me of that cartoon. There’s exactly one reason to watch the movie, which is Anna Kendrick’s luminous performance as Cathy. Jeremy Jordan’s Jamie is weak tea; it doesn’t help that the authors’ conception of the character is beyond insipid (what idiot would whine about being married to Anna Kendrick?) It’s supposed to be Same Movie/Different Stories, but all I wanted was vanilla.

Here’s the concept: The Last Five Years is about a relationship, told from two points of view. The original stage piece alternated between a woman and a man, singing solos at various points in their relationship. The woman’s first song happens at the breakup, and her pieces move backward in time five years to the beginning of the relationship. The man’s songs start at that beginning, and move forward. Their timelines intersect for one song.

As a concept, it’s interesting. We know how the story ends from the start, and we see the progression from two points of view. I haven’t seen a staged production, but I’ve listened to the cast album. Brown executes a simplistic take, using the gimmick mainly as an excuse to alternate sad/happy songs, but those who reflect might consider the circular nature of relationships – beginnings and endings coincide, with the participants rarely on the same page. The “two points of view” idea isn’t fleshed out – we don’t get Rashomon-style revelations, just one character’s internal monologue at a time, and their thoughts are pretty much what you expect them to be.

A good director might make something of this, maybe turn ho-hum into aha. LaGravenese isn’t that director. In his execution, Brown’s structure becomes even flimsier – he places both actors in most scenes, making it difficult to remember whose point of view is being represented, and losing the piece’s emotional isolation of each character. Whereas Brown only had one character performing at a time, the movie gives both of them dialogue throughout. A color scheme is supposed to help us keep track – blue for “sad” scenes, a bright yellowy hue for the early, “happy” scenes, and a really cloying green for the middle “this is where the timelines intersect” scene. The device merely indicates where they are in the Five Years, and it’s a simplistic, depressing idea that early=happy and later=sad.

Anna Kendrick makes the sloppy (often boring) narrative beside the point. She’s endlessly inventive in facial expression and makes the forced staging seem natural. We stay with her, and we almost root for the romance. As Kendrick plays the part, we have no difficulty believing her frustrated, romantic musical theater actress would sing every thought on her mind, and might even love her dweeb husband. Kendrick’s voice is more than acceptable, even if it’s short on power; her inflections are natural, like an extension of her speaking voice. Jordan sings well enough, but he’s not in the same league, acting-wise – Kendrick makes him look like the chump his character is, which might mean she’s doing some of his acting for him.

The relationship’s “problem” is in Brown’s original piece. Supposedly, Jamie is a literary novelist superstar who has to attend endless parties where gorgeous women throw themselves at him. Let’s review: literary novelist superstar. (Jonathan Franzen is offered as comparison; Franzen should sue.) Jamie’s only issue is that he doesn’t want to resist the women. Yawn. Cathy can’t catch a break in her career, and feels extraneous to Jamie’s. Yawn. She deserves a better life than the authors give her, and they finish the movie by cruelly stranding her at the beginning, leaving the impression she’s going to have to endure it all again (why couldn’t she have been the one who moved forward?)

Brown and LaGravenese do come up with one great scene, an audition Kendrick attends, where everything she sings is internal commentary on the humiliations she’s being subjected to. It’s as real and cutting as the “literary superstar” concept is fake, and suggests a much more interesting backstage musical that might have been.

Brown offers a handful of decent songs, although most fade away quickly. At 90 minutes, the movie feels long. LaGravenese struggles to make the images compelling: the camera moves around a lot without much purpose (the opening crane shot, showing different residents through windows in a building before lighting on freshly-dumped Kendrick, is a head-scratcher – is LaGravenese suggesting there are many possible stories to tell?) But the movie scores whenever the handheld camera is right in Kendrick’s face – she’s glorious in closeup, every darting glance and curled lip used to draw us in further. For me, that was enough. I like vanilla.