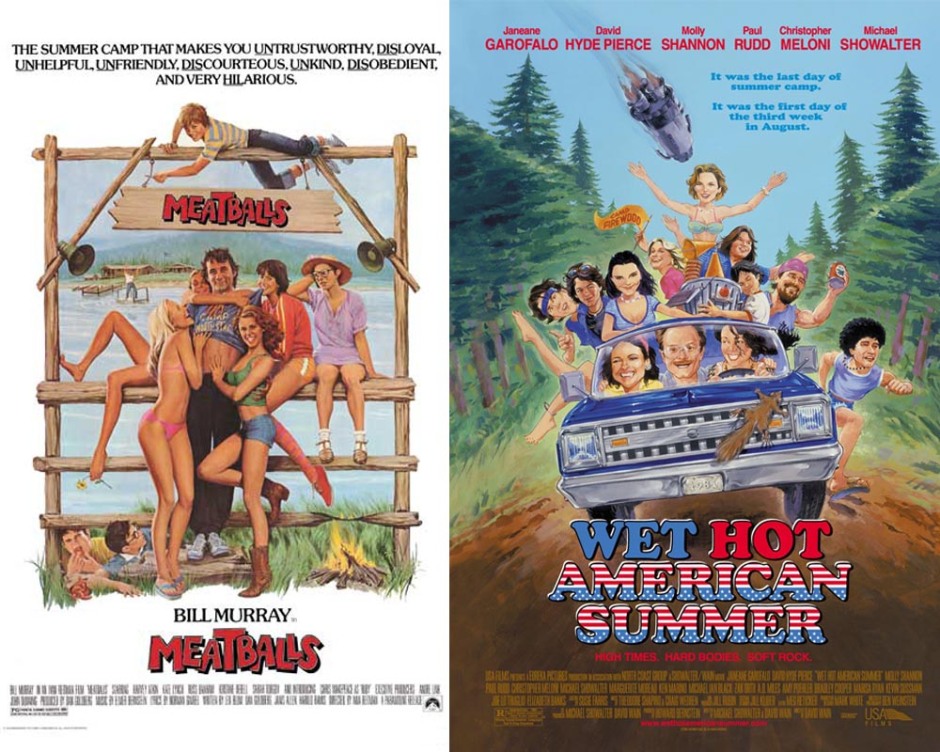 Ivan Reitman’s Meatballs has exactly one thing going for it, Bill Murray’s laid back “who gives a shit” cool as Tripper, head counselor at a low-rent summer camp. It was Murray’s first leading role in a movie, and it perfectly encapsulates his charisma, for my money more appealing than Dan Aykroyd’s hyperarticulate motormouth or John Belushi’s manic slob.

Reitman is a lazy, sentimental director; Meatballs has fewer laughs than you probably remember, the climactic footrace is tediously long and dull, and it doesn’t feature Murray. (The jogging fad was in full bloom in the late-1970’s, with long-sleeved red workout suits, white-striped down the arm and leg. My parents had the exact outfits Murray sports in the movie.) So: too much plot and not enough hijinx. The next Reitman/Murray collaboration, Stripes (1981), would feature an identical structure, with Murray playing essentially the same character (although it grossed four times what Meatballs did.) And then of course, they made Ghostbusters (1984).

At first glance, Michael Showalter and David Wain’s Wet Hot American Summer looks like a beat-for-beat remake of Meatballs. It’s also sentimental, but it’s sentimental about dumb sex comedies, not about its characters. The send-up is so smooth and affectionate it doesn’t immediately register as parody. (The movie confused some critics – while a few called it one of the year’s best, most dismissed it, including Roger Ebert, who gave it a 1-star “your movie sucks” review.)

I loved the opening of the movie, with dozens of kids waking up in each others’ beds and running back to their own, while counselors quarter-heartedly declaimed, “You’re not supposed to be out of your cabins.” It’s a funny beginning for any sex comedy, but I started to think something was twisted when a “trip to town” turned into a “trip in town,” a stunning bit of black humor that became funnier because it wasn’t mentioned again. I was pretty sure the filmmakers were having fun when a two-second bit about a kid tossed out of a van was repeated later as a non-sequitur. I was finally convinced it was all a put-on when the cook started humping a refrigerator, while campers cheered. Of course, the fact that it’s a sendup redeems the whole enterprise. It’s cheerfully heartless.

Netflix has revived Wet Hot American Summer as a series, which will be released on July 31. Netflix has been sponsoring incredible comedies lately – Orange is the New Black, Unbreakable Kimmy Schmidt, Arrested Development. Arrested Development was particularly brilliant, taking the joke-a-second original and turning it inside-out, upside-down and Rashomon-refracted. The Wet Hot… preview currently running on Netflix features the original cast, including Bradley Cooper, Janeane Garofalo, Molly Shannon, Paul Rudd, Amy Poehler, Elizabeth Banks, and David Hyde Pierce. It’s billed as a prequel – whereas the movie was all about the Last Day of Camp, the Netflix series will feature the First Day of Camp. Wonderfully, no effort has been made to make the characters look as young as they were 14 years ago. I can’t wait.