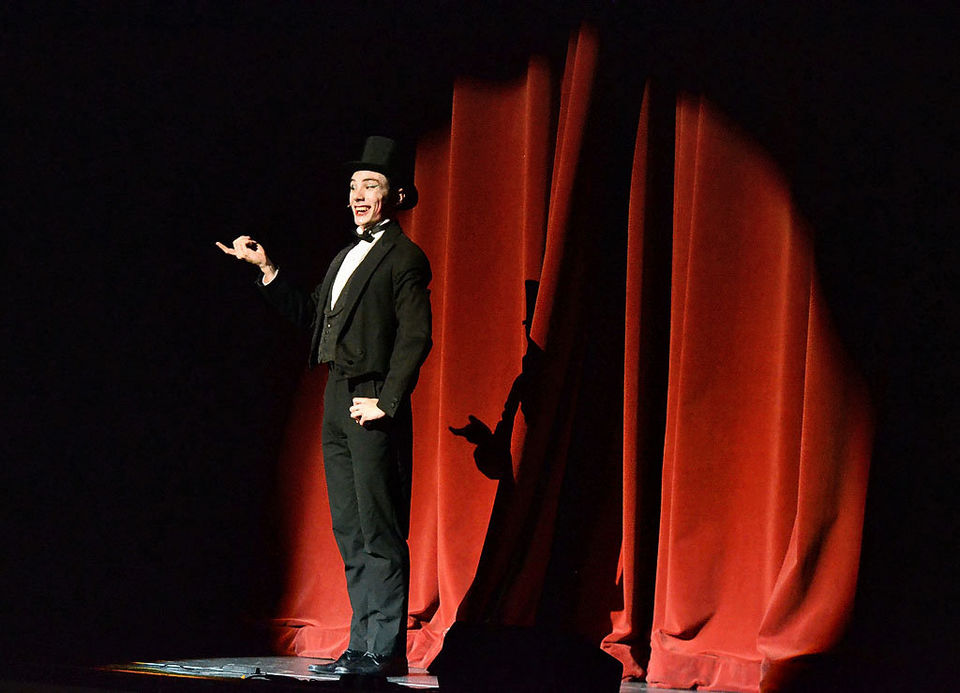 Manlius Pebble Hill school performs Willkommen from 'Cabaret'. The first annual Syracuse High School Theatre Awards was held at the Landmark Theater in Syracuse on Saturday night May 30th 2015. The event was sponsored by syracuse.com and the Post-Standard. Stephen D. Cannerelli / scannerelli@syracuse.com

Some of the best moments in my theater career have happened at high school productions. In fact, a disproportionate number of those were courtesy of teenagers. I love the “aha” surprises, when a performer finds a spark and burns up the stage, bringing the audience to its feet. Now, imagine a show composed of nothing but those moments, and you’ll have an idea of what I worked on last Saturday night (and for the past month). The first annual Syracuse High School Theatre Awards show is over, and if you love theater you’re already marking your calendar so you don’t miss it next year.

I was production manager for the show. When I heard the description, “a Tony Awards-style program honoring high school theater, with award presentations, live performances, and documentary videos,” I thought, “This could be very cool or it could be an absolute train wreck.” I took the job because I knew it would be difficult. We put a lot of balls in the air – three orchestras, 9 different student performances (wireless mics, costumes, full staging and lighting), big screen videos, a host, presenters, and 500+ students in the building. We had to coordinate two numbers where all of the students performed together.

Jeremy Ryan Brown, Landmark Theatre’s Director of Programming & Outreach, masterminded the program and hired the production team. Filmmaker Matt Adams created beautiful shorts. Our music director was invaluable – Mary Sugar recruited teachers from participating schools to play in the pit with just 90 minutes of rehearsal together, and she developed an overture and entr’acte based on the musicals that would be part of the show. Our sound company was incredible – Joe Fanelli handled over 100 inputs, dozens of musicians and special requests, and somehow made it all work. I hired my stage manager daughter Sarah to work with a dozen student volunteers, who did everything from jockeying wireless mics to running CD playback to helping awards recipients navigate the backstage area; she also helped the schools find their dressing rooms as they arrived. I recruited my wife Susan to hold down stage left and make sure the awards made it into the right hands. I handled the stage lighting and called the show.

The process started months ago. Syracuse Media Group sponsored the event. Schools from across Central New York were invited to participate. Around 25 accepted, including several from my neck of the woods – Waterville, New York Mills, Poland, Rome. Adjudicators attended the schools’ productions and turned in evaluations, which were tabulated to generate lists of nominees in several categories – supporting actor/actress, leading actor/actress, choreography, production number, etc. The nominees were publicized ahead of time. Seven schools were invited to perform production numbers at the show itself – a “greatest hits” package that left me wanting to see much more. Matt Adams worked on his 90-second documentary-style films about several of the participants.

I was brought in four weeks ahead of time to help plan and run the awards show itself. A hundred (or several hundred) decisions had to be ironed out – what projector and screen, what professional (union) stagehands, what volunteers, what musicians, what sound company, what stage lighting… Any production is limited by logistics – money, time, space, personnel. Plus, I’d never worked at the Landmark or with the Syracuse stagehands union. A show runs best with adequate rehearsal, but schools were coming from a distance; we decided to compress most rehearsals to the afternoon of the show itself. Setup was the day before, which had the usual number of hiccups and delays. And the countdown was always ticking. Every thirty minutes changed the recipe of decisions to be made; every decision had a cost.

Running any show, and especially this show, is an exercise in chaos. In theory, everyone knows what they’re doing and the person calling cues just keeps it all flowing. In practice, things don’t go as expected; a few people (out of hundreds) forget their instructions (or don’t listen), equipment malfunctions, the production manager flubs a cue or ten. People, often several at a time, offer suggestions. I’ve written that it’s a miracle when a production as large as a feature film doesn’t suck, considering the teamwork required to pull it off. The Syracuse High School Theatre Awards show wasn’t as big as a movie, but it was still pretty big.

Our show didn’t suck. I’ve got a list of two dozen or more lessons learned, and I expect if we do it again we’ll do it better and more easily. This is what it was all for: seeing high school students acting and singing and playing and working at something they love, hearing a packed house cheer and leap to their feet with applause. I still remember the first time I took a bow, blinded by the lights and overwhelmed at the audience response. 32 years later, sitting in the rear of the house, running the lights and guiding our show to its conclusion, the feeling was the same.

The following comment was passed on via a friend, and is printed here with permission:

“Very cool… Heard about this after I already had the night committed or I might have gone. I did see several high school shows this year and I do love them. No matter what the actual quality of the production, there is absolutely nothing like a high school show. I swear, if a kid were performing on Broadway, he/she would still want to come back and be in the high school show, even if just in the ensemble. It’s magic.

“I remember one in particular. A few years back, we did a community theater production of Guys and Dolls and on our last Friday performance, we had most of the cast of Port Byron’s production of the show, which was going up the following weekend. Best audience ever, because they knew every line and joke, laughed at everything that was remotely funny, and since they were living the show at the time, they were just swallowed up in it. They stayed after the show to meet us, and it was incredible. To them, we were Broadway. They all wanted to talk to their counterpart cast member and compare notes and their teachers had a tough time getting them to leave. So the next weekend, a contingent of us went to see them in their show…we had the best time! Because these kids were having the time of their lives on that stage. And the audience was with them for every line and every song…It was as magical as the finest high school production ever mounted. When they came out after the show to meet their family and friends, they couldn’t believe we were there. They had their pictures taken with us, wanted us to sign their programs…I can honestly say it was the very best time I ever had at a high school show.”