It was always my intention to compose a final reflection about my experience directing The Mikado, but that intention gave way to exhaustion and then some kind of depression, and I didn’t recover the desire until Susan brought me a bottle of Switchback Ale. Switchback is what the little store under The Earlville Opera House carried, and during production (aka Hell) week, I consumed several bottles. I may never again drink Switchback Ale without hearing The Mikado in my mind.

What did I learn? Did we meet our goals? Here are the most important paragraphs, and my immediate responses, from the Mikado journals I have posted already:

June 24: “My intention for our upcoming Earlville performance (and a hoped-for encore in Herkimer) is to ‘surprise and delight’ the audience. The music is primary – we’re going to sing the hell out of this piece. However, the icing on the cake is the characterizations, and the laugh-out-loud humor of the plot. Of course the songs will be well sung, but our audience will remember how they laughed.”

VERDICT: We didn’t sing the hell out of it. We sang well, but it didn’t match what was in my head. With that said, I love the music now more than I did then, and I think my standards rose as I knew the songs better. Our rendition of the Act I finale was superb, particularly because of Lisa Jones’ efforts. The audience laughter didn’t match my hopes, although the comic talent in some cases did exceed what I’d expected. In particular, Thom Capozzella gave a major comic performance I will always cherish, Steve Scheinman grew by leaps and bounds from rehearsal to rehearsal, and Ben Stovall and Janet Engle proved ideal comic foils in their lead romantic pairing. Another surprise was Sarah Hasegawa, who sprang to intense life the instant her scenes began.

July 16: “We’re about midway into The Mikado now, and I’ve gone through most of the stages of directing: optimism, exasperation, depression and exhaustion. These are not linear – sometimes all four come during the same day. (I’m still waiting for euphoria.)”

VERDICT: Exhaustion ruled the day. By the time we closed at Earlville, I was ready to be done. But I still had a full technical setup at Herkimer High School the next day, and we’d be using wireless microphones, which some of our cast members had no experience with. I’ve never been this tired after a show, or this slow to bounce back. Euphoria came only once, early in tech week – when I finally saw Act I performed all the way through, and I knew we had a show. (Act II was the next night, and a fair disaster.)

July 24: “I didn’t immediately know how I’d set The Mikado, which is one of the primary directorial concerns. This was partly because our creative team was very late coming together. It took a long time to find a music director, and choreographer, set, costume, lighting people (etc.) were also scarce. A theatrical project is an immense collaboration where everybody contributes and the product reflects all contributions. The director hopefully shapes those into something that provides entertainment and value to the audience, or at the very least makes a cohesive artistic statement.”

VERDICT: I don’t think we made a cohesive artistic statement. This is my fault. I asked the performers to imagine themselves in the imaginary Japanese Town of Titipu – they should have acted the same if we’d had full scenery and backdrops. Because we DIDN’T have traditional scenery, I decided to use a bare stage for Act I, and the “wrong” backdrop for Act II. The men emerged from the audience in Act I, in their street clothes, and I doubt most of the audience understood what I was getting at – that a show was emerging from something that should have been “CANCELLED,” as our onstage chalkboard sign indicated. This “meta” approach risked being cute, and I instructed everyone that we should never perform with a wink. They did well. I didn’t bring it together well enough.

When I was asked to direct, I was told that similar productions had raised $5,000 as fundraisers for the EOH. Somewhere along the line somebody said, “We shouldn’t have mentioned that figure. Rob (the previous director) had a following, and we don’t expect you to bring in the same amount.”

VERDICT: Mikado box office was almost $6,000. A success, and maybe a surprise. Of course, EOH gave us a budget of $500, all of which was spent on costumes. Our Herkimer performance allowed us to earn an extra $850, distributed among the cast and crew.

One of my biggest issues turned out to be an actor who couldn’t remember his lines. The actor didn’t seem to be aware (or to acknowledge) it was his problem – he tried to share the blame with his castmates. I had a lot of input about how to deal with the issue, and I rejected the best ideas. My priority was getting the actor through the experience with his dignity intact. If I’d had him pre-record his lines, or had another actor deliver them offstage, I believed it would be devastating to the man. (And if I’d had perfect foresight I would have chosen one of those options from the start – I laugh when I think about the character being “played” by a statue onstage with the actor reciting the lines into an offstage microphone.) In the end, we had another actor carry a portion of the script, ready to deliver the lines (as her own character) if it became necessary. It turned out to be necessary 2 out of 5 performances, and I appreciated everyone’s patience as we got through the situation.

A bat entered the theater during Act II on the second night. I was told this is rare, but it astonished me. The Earlville Opera House has no air conditioning or heating, so doors and windows are opened as needed. Many have screens, but not all. I became aware of the bat when I heard someone in the balcony scream. Above my head, I heard pounding feet and I thought, “Oh, shit.” The bat flew in front of the lights and cast a shadow on the stage when it did – even so, many in the cast and audience never knew about the problem. Still, many of our balcony audience ended up downstairs before the end. Long after they left, our slide operator (Alyssa) put on a pair of gloves and nabbed the thing. She stroked its belly as it squealed; our followspot operator (Susan) commented on how cute it was.

Our costumes were touch and go until the last minute. We were lucky to have a cast member (Heather) head this up, but we lost one seamstress early on, and a second one seemingly disappeared with a LOT of fabric until the very last minute. It was difficult to contact the person, and various rendezvous were cancelled before I finally recovered the (almost) finished costumes, Monday before our opening. I can’t say anything about this – as a performer, director, and someone who can’t sew, I was thankful our actors ended up with something to wear. For a period of time it was my problem, and it consumed too much energy. (My concept allowed for just about any costumes, but I think the fancy robes helped get the performers in a better frame of mind.)

We had a few choreographers quit before we ended up relying on John Krause and a few of the cast members for movement options. I don’t understand anybody who says, “I’ll call you back to confirm,” and then doesn’t. Confirmation isn’t just “Yes,” it’s yes/no. I spent FAR too much time trying to find people to help with movement. I was willing to let things ride, except John seemed to need a lot of “traditional” movement during songs so it would feel complete for him. I don’t have anything against traditional choreography (constant movement, apparently unmotivated unless viewed through a 1950’s lens) except when it’s not performed well. Our choreography would have been very nice if it had been performed perfectly; as it was, the movement was executed about as well as I expected. At which point it was too late to change. This is not to take anything away from the performers or from John’s intentions – I didn’t audition people for their dancing. I can’t dance, myself; I’ve taken lessons. Additionally, the ensemble attended at least two voluntary rehearsals to work and change their choreography as needed. My bottom line was that everyone needed to feel confident in the production. If I could do it over again, I’d have a choreographer on board from the start, and I’d be very clear about what I need in terms of dancing. Character is most important, sound (singing/voice) comes second; movement supports both.

When we got to Herkimer I was responsible for both lights and sound. Herkimer’s lights were iffy at best – out of 48 front lights, I could only make 6 of them work, all on the right side of the house. I’d arranged to borrow wireless microphones from a friend, because while Earlville was a performer’s acoustic dream, Herkimer was a traditional 850-seat high school auditorium. I ended up running both lights and sound. Jockeying wireless mics involves turning the mic on and off when the performer enters and leaves the stage – I had nine to worry about. If you leave their mics on, the audience hears them in the dressing room, or the bathroom. If you forget to turn them on, well, that’s obvious.

VERDICT: No sound mistakes, despite criticism from John Krause’s student team, which at first wanted less sound and then more, and who offered no help to accomplish any of the above. And I was running the damn lights at the same time.

I decided early to use super-titles (slides) to show the lyrics for every song. I’d worked a NY Metropolitan Opera touring show once where they had them, and I thought it was a great idea. I used my iPad with a $40 adapter, and a projector donated by Upstate Cerebral Palsy. 1156 slides, manually typed in by me (10 hours.) Two hours to hang the screen. Two complaints on the effect. Dozens of thank-yous, particularly from the “invisibly hearing-impaired” – those who don’t feel they need special services and don’t ask for them. We had slides for both Earlville and Herkimer. I’d do it again.

Susan Bord remains the very best followspot operator in the area. A lighting designer’s best friend, savior, and secret weapon. Nobody ever knows or appreciates the sore shoulders and stiff arms such people endure.

John Krause astonished me as musical director. It really couldn’t have happened without him. I want to sing under his direction someday.

Sarah Bord continues to develop as a stage manager. My criticisms are surely because I expect way too much as a parent (many in the cast and crew commented on her professionalism, which I dismissed because it’s just how I am.)

Now, I hope to find a new drink as I consider the next show. 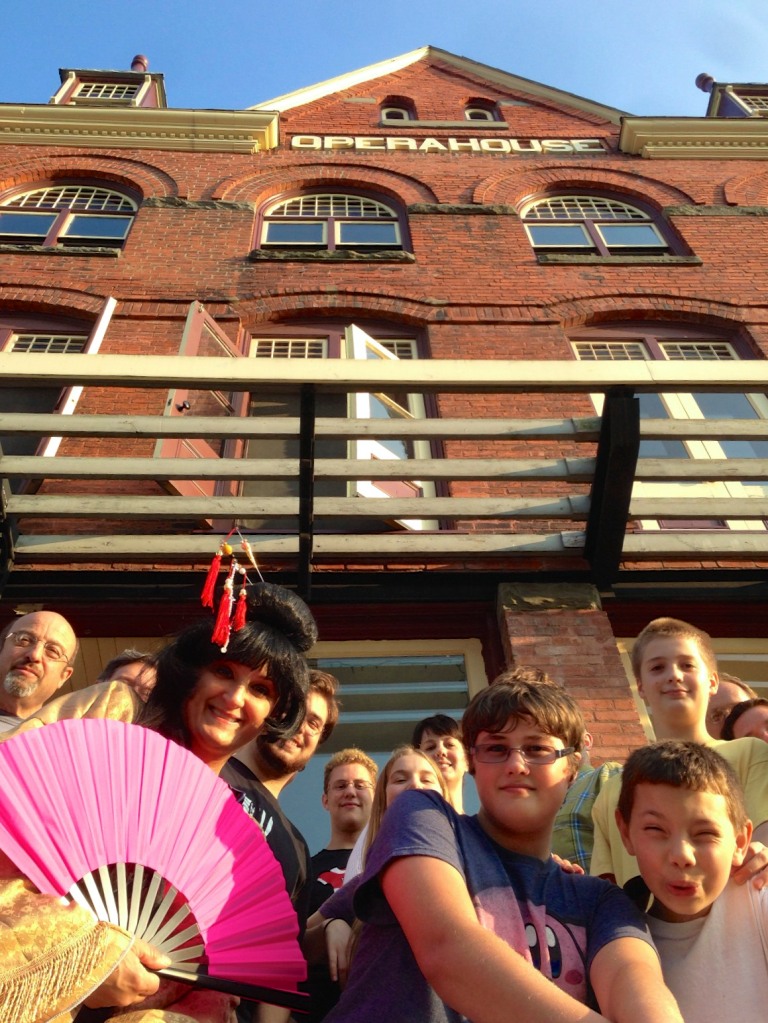