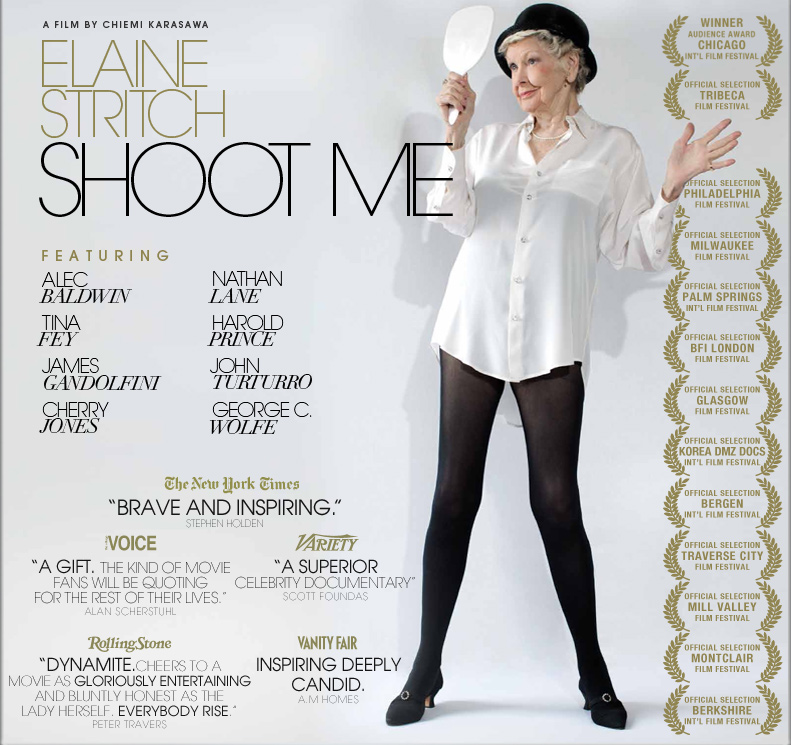 The appeal of Elaine Stritch has always been just out of my reach – I understand that people adore her and I’m willing to concede that my taste might not be fully developed where she and some other Broadway belters are concerned. On the other hand, Chiemi Karasawa’s documentary probably should not have taken for granted that we already believe Stritch is a wonderful performer.

Karasawa has a tentative through-line, as Stritch prepares for a brief series of cabaret shows. Interspersed are testimonials from other performers and directors, eulogizing Stritch as if she’d recently passed on (she died last week, more than two years after filming.) The rest of the film is Stritch being a needy, spoiled rotten diva bitch. Some refer to this behavior as “uncompromising,” or “brutally honest.” But honesty doesn’t cover the parts when Stritch declares again and again that she’s had her last drink, only to order another in the next shot. Or the scene where she says she’s going to stop sacrificing and start making decisions in her own interest, sitting in her corner apartment at The Carlyle Hotel, where she lived for 12 years (the sacrifices she alludes to are never made clear.) Much of Karasawa’s film could also be a cautionary tale about how not to manage diabetes – you wish some of Stritch’s entourage would stop rushing to get her orange juice and insist that she grow up.

The scenes of Stritch performing are somewhat terrifying, and mystifying for someone not already convinced of her wonderfulness. We see her in despair during rehearsals, struggling to remember lyrics during shows and being escorted on and off the stage – there is always suspense that she’ll collapse or fall apart entirely. Karasawa gets a few reaction shots of audience members who seem to be worried about just that, and their applause seems more relieved than appreciative. Is it courageous for performers to keep going out under such conditions? Many reviewers think so. In Stritch’s case, she says more than once that she does it for herself – the audience’s love is her great addiction. (One person’s courage is another’s narcissism.)

I didn’t care for the camerawork or the sound recording in much of the film. Surrounding noises are often as loud as the subjects, and scenes are often shot from strange angles, especially the performances. This adds to the impression of a performer on her last legs, slightly bewildered and off center. The funniest scene is in some ways a cruel joke, as Stritch excoriates the camera operator for not following her into the hallway when she throws out some garbage. He appeases by allowing her to repeat the action and following her, but the camera is awkwardly on her midsection the entire time, and you sense there were many other such moments not shown. The impression is of a diva trying to micromanage her story (ridiculously) and the cameraman half-assedly humoring her.

The movie’s best scene is actually from another documentary, D.A. Pennebaker’s Company: Original Cast Album (1970). We see that film’s climactic scenes of Stritch failing to nail her rendition of The Ladies Who Lunch, then coming back the next day and knocking it out of the park. I’ve got the album being recorded during the scene, and I never loved her voice on the song. Seeing her actually singing it gives me the starting place for what people appreciate about Stritch. Her face becomes startlingly alive, and you feel the song through her expressions as much as hear it. Elaine Stritch: Shoot Me needs more scenes like that one.