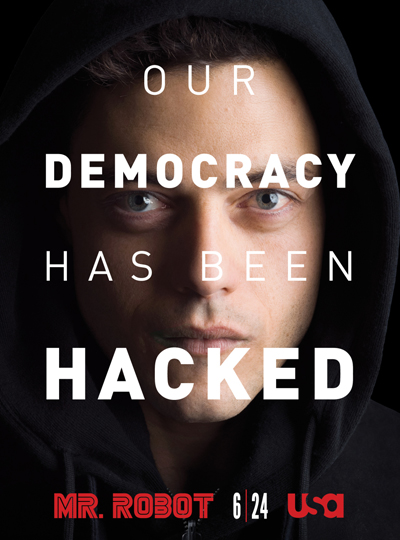 What happens when most of the critical response to something is shaped by WIRED magazine and its ilk? Let’s see… Mr. Robot has a 98% “fresh” rating on Rotten Tomatoes and a 9.0/10 score on IMDB, seemingly driven by articles like Kim Zetter’s, which are thrilled that Hollywood has finally gotten computer hacking “right.” Setting that aside (I’ll circle back), I have a hard time getting excited about accurate depictions of hacking when they’re set in a dramatic house of cards riddled with clichés, dimestore psychology, hackneyed writing and bad acting.

“Narrative secrets are not the same as human mysteries, a lesson that novelists seem fated to forget, again and again…” James Wood wrote that in a New Yorker essay (not about Mr. Robot), an admonition that should be taped above the screens of television writers, even more than novelists’. Mr. Robot creator/writer/director Sam Esmail burns through revelations like he’s trying to get Shonda Rhimes’ attention; unfortunately, where ShondaLand productions often find a quirky humanity good actors can fill out and run with amidst (despite) the twists, Esmail writes like a fanboy who’s been staring at a Fight Club poster too long.

I was cautiously optimistic after the pilot episode (although not as excited as USA Network executives who ordered a second season on that basis alone.) I thought Rami Malek was good as Elliot, a 20-something who struggles to fit into society but is only comfortable in his own room, in front of his computer. Still, Elliot gets it together enough to personally confront the targets of his nocturnal vigilante hacking, which might be written off as a concession to dramatic necessity, except the series keeps pulling those switches as the narrative requires. In other words, getting the hacking right shouldn’t supersede getting the hacker right. Elliot is overloaded with character traits: in addition to social anxiety, he’s a drug addict, borderline manic depressive, on the autism spectrum, pining after his dead father and terrified of his abusive mother and maybe delusional for good measure. (It’s tribute to Malek that he almost pulls off the performance – the writing doesn’t do him any favors.)

Elliot is drafted into a hacking group called fsociety, whose goal is to erase a giant corporation’s data. That’s E Corp, the largest energy/banking/healthcare/grocery conglomerate in the world. To make sure the audience understands E Corp is Really Bad, they are given Enron’s old corporate logo, and every character calls it Evil Corp. Sure, the nickname is supposedly Elliot’s delusion – he says as much – but the company’s executives are invariably depicted as cackling monsters who plot world domination with Asian businessmen over caviar and champagne. One VP pays a homeless man for the privilege of beating him senseless, fires his underlings on a whim and cries when he is subsequently fired himself (for being implicated in a murder, one of the many subplots that never pays off.) The show’s insistence on stereotypical villainy undermines the potential interest generated by the unreliable narrator. Mr. Robot’s philosophy boils down to this: Hackers Good, Business Bad.

Along the way, Esmail throws in basic cable titillations – a man walks into a bathroom while a woman is urinating, and she secretly likes it; a pregnant wife insists on being tied to the bed and flogged; there are a few requisite lesbian flirtations; some gory deaths; a Muslim offers morning prayers… None of these contribute to a larger picture – the ten episodes contain a lot of filler and repetition. (Mr. Robot was originally written as a movie – the bloat makes sense if one imagines Esmail was more interested in his plot, which he didn’t bother to expand, than his characters.)

Elliot’s fsociety cohorts are as stereotypically dull as the group’s businessman opponents. They include the aforementioned Muslim woman, a goth-eyed party girl, a wiry black guy (probably an ex-boxer), and a fat slob (with glasses, of course). Nobody does much of anything – for a show that claims to get hacking right, very little time is spent actually coding. When they do start to type, it’s all lightning fast off the top of their heads with no typos, and the code executes flawlessly on the first try. When the hackers talk, it’s utopian “let’s change the world” crap that rings as false as E Corp’s “we own the world” corporatespeak. The real hackers I’ve known talk code, type code, eat and sleep code, and mostly have no grand design beyond “I’m doing this because I can.” Only Malek sells any of it, although he has the advantage of being able to mumble a lot (when the script has him yell, he’s as inept as the rest.) Portia Doubleday, as Elliot’s best friend, is particularly rote – her line readings and facial expressions barely change, despite an arc that requires the audience to suspend disbelief and accept her as a whip smart tough cookie who’d not only go to work for a company she believes killed her mother, but be instantly welcomed into the C-suite. (Sure, it’s dumb, but c’mon – make an effort.)

The ads for Mr. Robot are tagged “OUR DEMOCRACY HAS BEEN HACKED.” Politics are almost nonexistent in the Mr. Robot world, so I’m left to assume Esmail equates capitalism with democracy. In the show’s world, the evil corporate monolith has taken over capitalism, so it follows that E Corp is the hacker the tag refers to. (Elliot and fsociety never, well, almost never, hack anybody who doesn’t deserve it, and would certainly never hack Democracy Itself.) I waited in vain over 500 minutes for a twist that might align the show with something beyond its paranoid, easy target fantasies (the reason Esmail sets up Elliot as an unreliable narrator is pedantic and obvious – you’ll see it coming and then sigh when you realize that’s what everything was building to.) The show never questions whether fsociety might be wrong – the group is unambiguously set up as virtuous, despite the implication of their name. They love society! So, yeah, it’s all a tease. I think it’s the critics who were hacked.