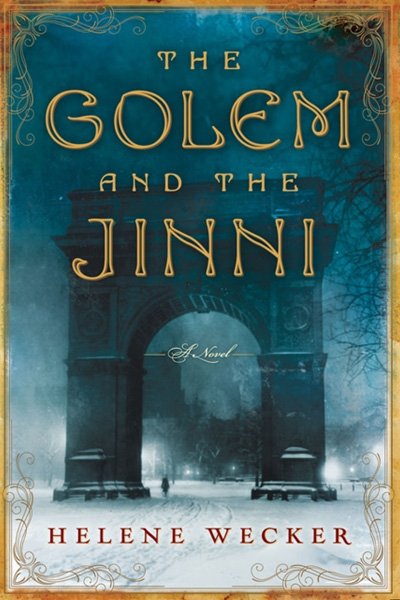 I listen to audiobooks while exercising, performing household chores, and in the car. These in addition to several books I might be also be reading, paper or e-book format, at any given time. Novels that make good audiobooks aren’t too convoluted with language, and feature a plot that isn’t bothered if I miss a few lines because I got distracted. And the narrator has to be good.

The best audiobook narrators are great actors, masters of dialect and intonation. They can make a ho-hum book engaging (Scott Brick does wonders with Robert Ludlum) and sometimes elevate good books to transcendence. That’s what George Guidall has accomplished with his brilliant reading of Helene Wecker’s The Golem and the Jinni. I started the book with no particular interest in the subject matter, and was soon transported by Guidall’s narration. It’s a phenomenal performance.

Wecker’s debut novel is set in New York City, 1899. She spins a yarn about a golem, a clay creature brought to life by a Hebrew mystic, and a jinni, a creature made of fire. Both are supernatural beings that find themselves hiding among poor immigrants in turn-of-the-century New York, an ambience rendered affectionately by Wecker. The novel unspools like a fable, gradually accumulating moral force as Wecker’s plot threads gather in a complex design.

This is a novel to be reveled in – although the ultimate shape of the plot is satisfying, Wecker’s close observations of human behavior and relationships are her main strengths. Dickens was the master, of course, but Wecker’s prose offers more simple pleasure in human interaction than any novel I’ve experienced since Larry McMurtry’s Lonesome Dove (also a great audiobook, narrated by Lee Horsley.)

I was disappointed at the quick denouement once the plot spun up – it’s so leisurely for so long, I could have happily listened twice as long.  Still, the story is full and satisfying, with meditations on freedom, the nature of life itself, and what it means to be human.  Read this book; better yet, listen as George Guidall reads it for you.