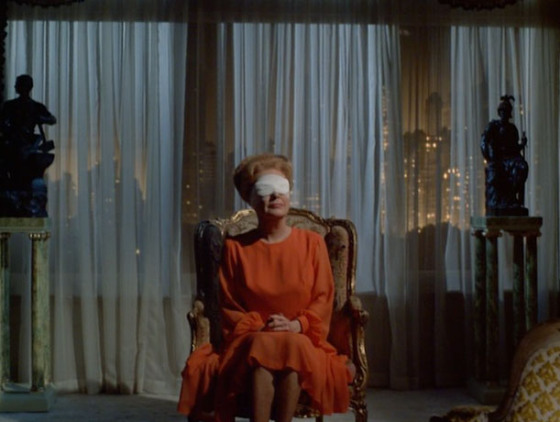 Second in a series

Steven Spielberg dropped out of college at 21 when Sid Sheinberg, head of Universal Television, signed him to a seven-year contract. Spielberg’s first assignment was to direct the middle segment of the pilot for Rod Serling’s Night Gallery. The piece, called Eyes, was written by Serling and starred Joan Crawford. It was about a rich woman, blind from birth, who pays a man (Tom Bosley – more interesting than Crawford) $9,000 for his optic nerves to gain sight for just twelve hours.

Spielberg recalls that nobody from the studio informed Crawford about his age, or that he’d never directed professionally. He says when he arrived at her apartment, she was blindfolded, “getting into character.” When she removed the blindfold, she exclaimed “We can’t go out to dinner – people will think you’re my son!” She asked Sheinberg to replace Spielberg “with someone 70 or 80,” but Sheinberg wouldn’t do it. The first day on set, Spielberg remembers that “everyone on the crew was in their 40’s and 50’s, and they weren’t about to listen to a 21 year-old kid.” Crawford stood on a chair and told the crew she’d worked with Spielberg before, that he was an excellent director, and they should give him the same respect they gave her. Spielberg and Crawford remained friends until she died, in 1977.

Spielberg says he made plenty of mistakes on Eyes. “They had to re-edit, because I was doing a lot of new wave European cinema shots through chandeliers and glass baubles… European new wave cinema does not go along with NBC.” Those shots remained in the final cut, although much of the 30-minute segment is rather static, particularly when people are talking. The most interesting sequence is when Crawford’s character is finally able to see, which coincides with a power outage (she thinks she’s lost her sight again.) Spielberg films her against a black backdrop with a single light source, showing only her figure as she staggers around in fury destroying her apartment – the objects aren’t shown but we hear them. Another interesting shot takes place in a lawyer’s office, composed so the surgeon and the lawyer appear to tower over the hapless Bosley (their victim). Later, as the operation is completed, Spielberg superimposes Crawford’s face on Bosley’s, her eyes opening as his close – a bizarrely chilling image.

Eyes isn’t nearly as freewheeling as Amblin’, the work of a budding auteur. Given the constraints, it’s interesting how many flourishes the director was able to squeeze in. A second viewing reveals more of those, once you’re tuned in to the many ways Spielberg demonstrates how things are seen, and especially how things aren’t always as they appear. Spielberg went on to direct an episode of Marcus Welby, M.D. (1970), another segment on Night Gallery (Make Me Laugh, 1971), two episodes of The Psychiatrist (1971), one episode of Owen Marshall, Counselor at Law (1971), and the premiere episode of Columbo (1971). Next, we’ll take a look at the TV movie Duel (1971), which marked the beginning of the next phase in Spielberg’s artistic development and career.