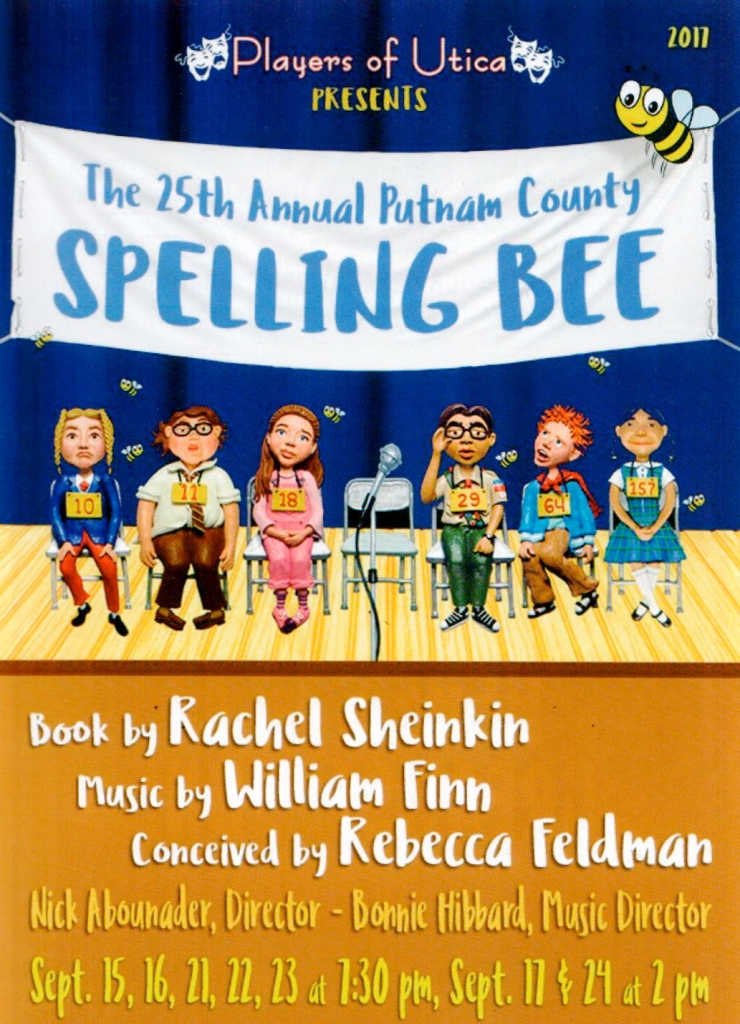 My favorite moments in theater are when I’ve been caught off guard by a performance, or was surprised to love a piece I hadn’t expected to. Director Nick Abounader and company pulled off something close to theatrical alchemy with their recent production at Players of Utica, The 25th Annual Putnam County Spelling Bee: the ensemble was so in sync with the material and each other that the whole thing became gloriously more than its parts.

The piece itself, which I hadn’t seen before, seems at first glance a ramshackle assortment of songs and gags. I’d been to a couple of rehearsals for this production, as lighting consultant; I saw individual schtick that hadn’t yet coalesced. Community theater by definition draws inconsistent levels of performance skill, with at least a couple over-actors stealing attention. I worried this material would encourage that kind of “look at me” presentation. What I didn’t realize until I sat in the audience last Sunday was how skillfully Abounader had chosen and calibrated his performers. It’s not overacting when everyone is doing it at the same level. These individuals weren’t saying “look at me,” but “look at us.” What a difference.

I said the musical appears ramshackle at first, which also serves a purpose. Four audience members are chosen prior to the show as contestants in the spelling bee, along with the performers. The audience participants are then “managed” by the cast, guided (sometimes manhandled) through choreography and coached through the spelling competition. Unpredictability is integral to the humor of the show, and I was constantly delighted by the improvisation of the cast as they managed the volunteers.

The 25th Annual Putnam County Spelling Bee is actually a perfect piece for community theater, because it makes community involvement literal. (A less adept cast might have lost control of the show; some of the volunteers tried to steal it, and were cleverly redirected.) But it wasn’t until late in the second act that a different spin was put on community, as Mary Dziekowicz delivered a show-stopping, blistering political monologue that ranks as the single bravest thing I’ve ever seen on a Players of Utica stage. The audience was mostly stunned (the speech would have received a standing ovation in other counties), their discomfort palpable as what had seemed a frivolous entertainment was suddenly demanding a different kind of engagement. It was a brilliant demonstration of what live theater does best, yet too rarely attempts.

Beyond that transformative moment, the production was packed with sight gags and clever bits of choreography, all thrown into the mix without too much fuss. For example, the motivational posters on the walls of the set were delightful easter eggs – only the keenest eyes in the audience could have read them from their seats, but the jokes weren’t underlined; nobody insisted we get them. (Note to Players, put them on the website.) Other bits were goofy, Monty Python-esque throwaways. I also enjoyed seeing a performer (in character) sell intermission snacks. Kudos as well to the performers and musicians for achieving a rare balance in a space that continues to have dreadful acoustics – we could hear everything, even with the air handlers running.

I’ve written before that standing ovations have become almost expected, as if not standing is rude. For me, it’s the highest compliment I can offer. I want to stand because something pulls me out of my chair and compels an ovation, not because it’s expected. I can say without reservation that I was first on my feet for this great production; bravo to cast, musicians, creative team and crew. Thank you.