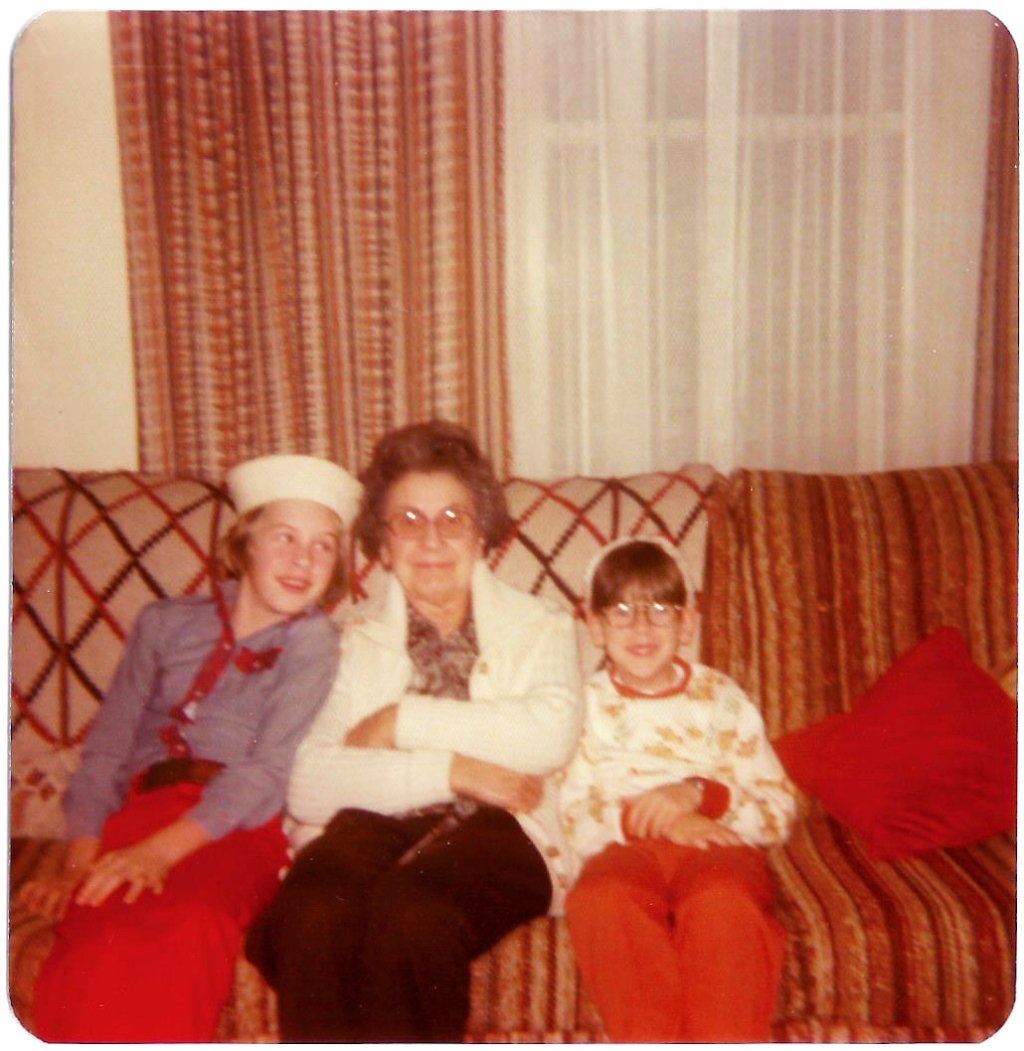 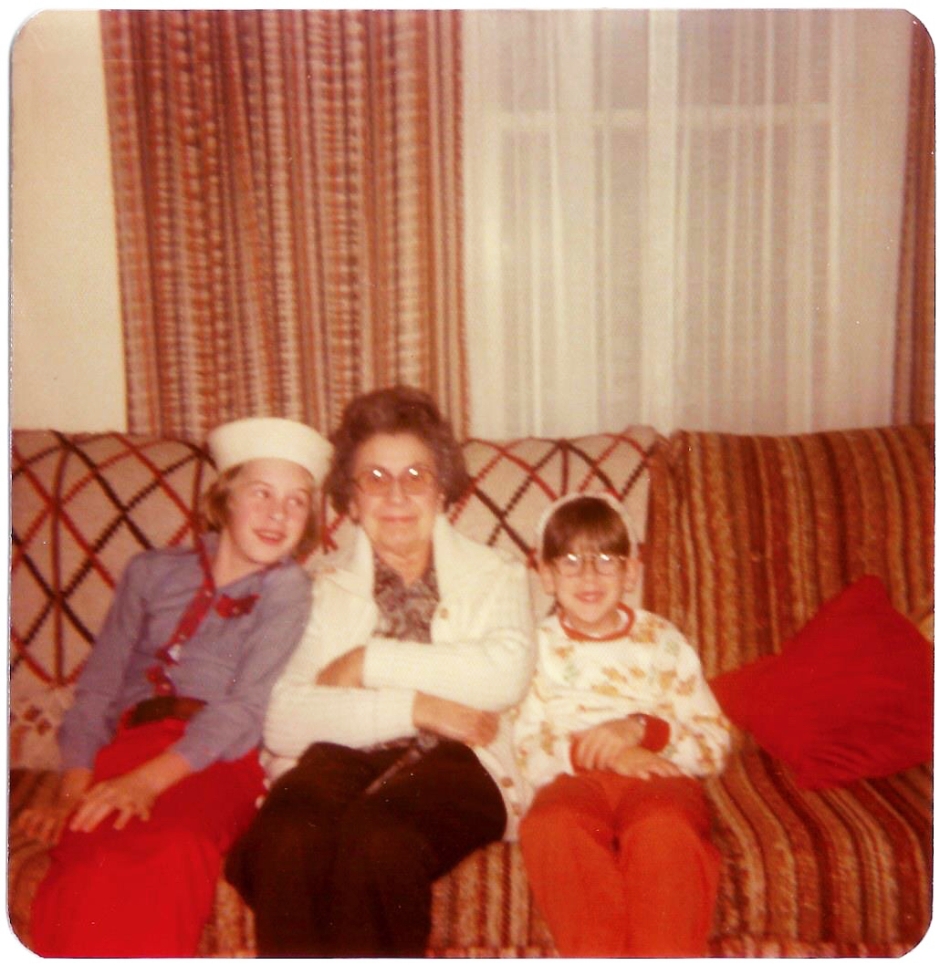 My bedrock memory of Christmas is visiting Grandma Albers’ house in Yorkville, NY. (When I had children, she became Grandma Ruth.) More than anything else, that was what I anticipated, the glorious week we’d spend at that magical place. On Christmas morning, we’d pile into our wood-paneled station wagon and set off down the Thruway. My brother or I would make a bed of pillows on the floor in back (to level the center hump), the other would stretch out on the seat. Later, when our sister arrived, one of us would be allowed to nest in the “way back.”

We knew the markers on the Thruway – the 50′ McDonald’s sign meant we were almost there. Finally, Exit 32, Westmoreland. Another few miles. Tiny duplex houses going up Burrstone Rd. in New York Mills; I intended to live in one of those very houses someday. Our hearts quickened. Past the hospital where Uncle Jim worked, down the hill, turn onto the street. Even now, when I pull into that same driveway, I feel some of the childhood thrill – a short trip up the back stairs to arrive at Grandma’s at last.

Grandma had a small upstairs apartment in a partially converted attic. Up a winding staircase in the cold, past normal attic stuff – boxes, old furniture – to reach her door. The ceiling sloped down on both sides. Once inside, bathroom on the left (strict prohibition against flushing the toilet when people were asleep downstairs), kitchen straight ahead, then bedroom/living room in front. She had a convertible sofa my brother and I slept on – pulled out, it just about touched the foot of Grandma’s bed, so we had to climb over them to reach the window.

Our cousin Cathy, a month younger than me and my life’s true soulmate, lived downstairs. Cathy would come upstairs for breakfast, the three of us crowded around a tiny table while Grandma stood at the toaster and made breakfast. Coffee, tea, orange juice, forbidden sugary cereals, Quaker Instant Oatmeal, Eggo Waffles, Thomas’ English muffins with Fleischmann’s margarine; Polish music on the AM radio. Unfailingly, and by that I mean every single morning, muffin crumbs in the toaster generated enough smoke to set off the alarm, sending Grandma into a tizzy of foot stomping and towel waving, desperate to make enough breeze to silence the device lest Uncle Jim awaken in the bedroom below. 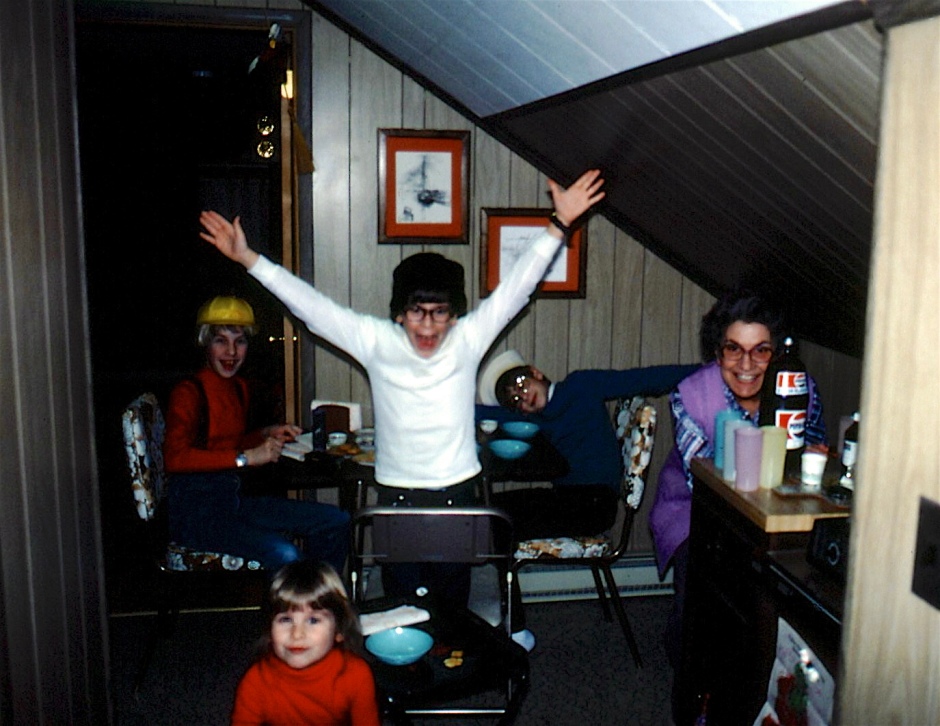 On New Year’s Eve, we’d tool at 35 MPH in Grandma’s 1968 green Volkswagon Beetle, collecting junk food for our party at Grandma’s, the party event of the year until I was in my teens. We’d watch Dick Clark’s Rockin’ New Year’s Eve and dance in that tiny living room with the sloped ceilings until we collapsed, sugar high and silly. Barry Manilow would sing Another New Year’s Eve and our eyes would finally droop. Through it all, Grandma watched us from her rocker, contented smile on her face.

We didn’t love our time at Grandma’s for the food, the Christmas presents (usually clothing), or even the Polish music. We loved being loved by her. I’m sure we recognized the feeling, even if we didn’t know how rare it is in life. Grandma Ruth died in 1997, just after I married Susan. This is our 19th Christmas together, my 19th without Grandma. This morning, my household woke and carried out a ritual similar to the one from my youth. The ride is shorter now, just under three miles, but the love is the same: Sarah is the royal princess of her Grandmother’s house. It’s a special gift to be loved so unquestioningly and thoroughly. Merry Christmas to Grandmas everywhere. Thank you.